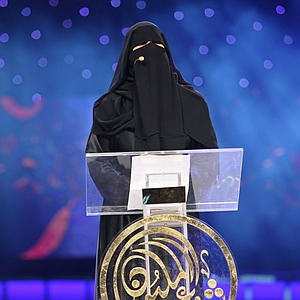 Hissa Hilal wears a traditional burka and perhaps for good reasons other than the religious ones that led her to wear it in the first place. Currently one of the most reviled personalities in the Arab world, this outspoken finalist on the Arabic version (“The Million’s Poet”) of the Idol show (yes the show is that contagious…) caused heads to turn when she began to question what passes for the law in the Arabic world.

Courtesy of the NY Post, whom for once we applaud for bringing this story to attention:

Unlike the wildly popular Fox show, contestants in the Middle Eastern version recite traditional and original poetry rather than sing.

While most regale the audience with odes to the beauty of Bedouin life and glory of their rulers, Hissa Hilal stunned audiences last week by attacking Muslim religious leaders as “vicious in voice, barbaric, angry and blind,” and guilty of “preying like a wolf” on people seeking peace.

So how do you think that went down? Did Hissa get offered her own reality show, petitioned to bare it all in some Arab barely Legal mag? Well not really, continues the report…

But her brave words clearly tapped a nerve, as she was wildly cheered by the audience and voted into the competition’s final round.

Well, that’s what you call bravado. Perhaps Hissa’s actions can also inspire some of our American counterparts to consider altruistic missions and instead of banging their heads to become consummate media whores with product endorsements they can occasionally too step out of line and let the world know that there’s a bit of cronyism going on back home too.