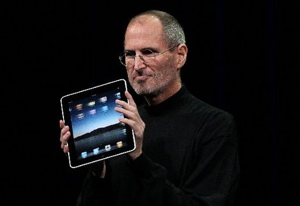 The clever things Apple comes up with to get you to spend your money.

It’s a cross between an I phone and an laptop, half the size of a traditional laptop, with half the features of a laptop and without the features of an embedded I- phone (as of yet) and yet half of America spent Saturday morning waiting in long lines to acquire the new must have (and like you when promoters and advertisers tell us this is a ‘must have’ we get out of our weekend slumber and run to the store…).

With workers cheering shoppers (a/ because they were told to and b/ the more money spent the more they are secured of maintaining their jobs), shoppers hustled to get their hands on this new must have. Except something strange happened. That although some Apple analysts were impressed and inspired by the sale of 600- 700 000 units that first day (more than what they expected) Apple still had enough to go around. Last time Apple introduced its new i phones in 2007, waits of up to two weeks were experienced and here we are reading that sales have already beat analysts estimates which only has us wondering, why are analysts issuing soft estimates in the first place (which is another way of saying why does a bouncer keep you waiting outside a club when there are only 6 people in the club the first place) and how is it that Apple has ample reserves of its new I pad and what does that suggest?

In any event, not everybody is impressed with the new Ipad , particularly Bertelsmann AG’s Random House, the world’s largest trade publisher, but that didn’t stop Apple from issuing its 60 000 free book issues courtesy of ‘I book’ (who is supplied by competitors like Amazon and Kobo Inc) which you can read as a tablet form. In any event it’ll be curious to see how brave the world really is in the way it absorbs culture and really how clever APPLE is in trying to bring that change along, courtesy of its coffers of course.