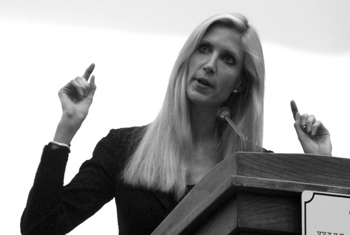 It seems as if trouble maker and irascible loony tunes and outspoken xenophonic zealot Ann Coulter (who dislikes all foreigners and most particularly Muslims) was not wanted herself yesterday when she touched down in Ottawa, Canada to give a lecture yesterday. The reason? Apparently Canadian’s have another interpretation for what passes for freedom of speech.

That said let’s have a look below and see why Canadians have a hard time accepting Ann while their neighbors in the South (that being the USA) embrace her.

Controversy has stemmed from Coulter’s writing, which some critics say promotes hate.

In one prominent column she wrote for the nationalreview.com after September 11, Coulter said: “We know who the homicidal maniacs are. They are the ones cheering and dancing right now. We should invade their countries, kill their leaders and convert them to Christianity.”

Wait a second. You mean I’m not allowed to hate someone in Canada? That doesn’t make sense, cause in America, everyone hates everyone…

So there was Ann getting ready to give a speech about hate and then what happened?

Bjorn Larsen, the president of the International Free Press Society, the group who organized Coulter’s speaking tour, expressed his disappointment at having to cancel the event. “I promise you that we will try to bring Ann Coulter back,” Larsen said, which received loud applause from the audience, but was drowned out by protesters in the back who chanted “Ann go home!”

“It is an embarrassing day for the University of Ottawa and their student body,” Levant said. But protesters outside were happy to see the event canceled. Levant said there were “2,000 intimidating protesters pressing against police,” but officers confirmed there was closer to 200 demonstrators.

Bloody protesters, always protesting. Can’t they just let Ann blather to all her friends that she hates them too? Well maybe, as long as Ann is willing to accept responsibility for actions and words then she should be free to express them.But something tells me she is not willing to accept the consequences of offending people. That would be a two way street and as we all know in America it’s always more comfortable to drive down a one way street without having to sometimes face consequences. Can’t Canadian’s just be like Americans for once?

Coulter has said previously that Muslims should be banned from airplanes and instead use “flying carpets.” Al-Dhaher had asked Coulter how she was expected to travel, since she didn’t own a flying carpet.

No we couldn’t find a flying carpet either, but we’re sure if Ann asked us to push her off a ledge while she sat on a carpet we’d be willing to see if she too could suddenly fly…