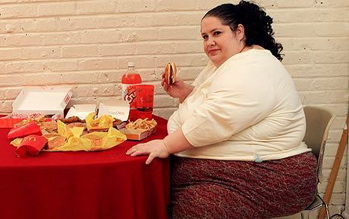 Donna Simpson is on a mission to weigh in at 1000 lbs. Thankfully for her she is already 600 lbs in and if everything goes according to plan Donna will soon be able to reach her goal. Does Donna’s mission scare you? Most likely, but then there are things about Donna you just don’t know about…

Simpson claims she is normal and healthy, and she has a right to eat what she wants and weigh what she wants. “I love eating and people love watching me eat,” she says. “It makes people happy, and I’m not harming anyone.”

Mmmh why do people enjoy watching Donna eat, is there a chance that Donna has confused terror for what she perceives as joy? That said, this is a free country and if Donna wants to gorge herself to death (which is what she is doing) then who are we do disagree? With a daily calorie intake of 12000 calories a day Donna also has found herself having to get around in a way unlike most people.

But she needs to use a motor scooter when she goes grocery shopping, because she can’t walk more than 20 feet. The human body, after all, is not designed to scarf down 12,000 calories a day in the quest to weigh half a ton.

Motor Scooter? That kind of makes sense, but what really doesn’t make sense is why Donna feels she has to weigh in at 1000 lbs?

Simpson’s main source of income to support herself financially is by appearing on a Web site where men pay to watch videos of her gorging on food and showing off her hundreds of pounds of extra bulge in a bikini.

So Donna is a model, but in reverse, instead of starving herself so she can maintain preferred fashion stereo type images, Donna is gorging herself to maintain the stereotypical image that her clients have come to expect of her. It all kind of makes sense, doesn’t  it?

“My favorite food is sushi. But unlike others I can sit and eat 70 big pieces of sushi in one go,” she told the Daily Mail.

“I do love cakes and sweet things, doughnuts are my favorite.”

Yes we like doughnuts too, especially the one with the frosty colored speckles, but only one doughnut at a time, (maybe two if it’s after a binge of drinking) every 3 months. But then again Donna is determined and she is a model for hire.

In any event, we look forward to receiving the good news that Donna eventually reaches her goal. We just hope it doesn’t kill her along the way, but then again there will always be the motor scooter to remind us of Donna.