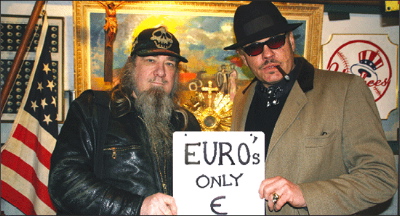 On Friday March 19 William, Billy, LeRoy of Billy’s Antiques and Props got the surprise of his life.  Around 11 AM Billy got a call on his cell phone that there was a major commotion happening at his store on Bowery & Houston. Billy all excited quickly drove to his store.  He thought the new independent feature movie he starred in, Dirty Old Town, directed by the 2 new young downtown film sensations Jenner Furst, and Dan Levin, had been accepted in Caanes.  It was Caanes alright- a one way ticket to the Can- 100 Center Street.

Turns out the MTA subcontractor he had, for more than a decade, been legitimately buying the used scrap MTA subway signs from had lost his contract with the MTA, but not his connection to getting the used signs.  Billy’s supplier had been caught buying and selling these signs.   Billy got caught up in the scam.

The arresting officers were sympathetic to Billy, gave him the white glove treatment, told him not to sweat it and he was shepherded  through a quick tour of one the grimiest places in NYC–  the infamous jail called “The Tombs”.

The last international news exposure the Tombs got was the record breaking name changes of a public building.  The Tombs were renamed the BBKC or in long hand the Bernard B. Kerik Complex. Bernard B. Kerik, Giuliani’s disgraced Police Commissioner, is now himself a graduate of the Tombs, and is serving out his 48 month felony conviction in the states prison system.

The judge immediately cut Billy loose with no bail, all experts are reassuring Billy his case will soon be resolved. So, in the end, the real major drama is: will Dirty Old Town be accepted in Cannes. Anxious Billy is waiting to buy his airplane ticket to what he dreams will be his new “Star” exposure.

Billy- feeling tired and soiled from his dirty experience in the Tombs.

The winds of fame and trouble have been circling back and forth between Houston and the Bowery and S&V.  It turns out that  the Wall in the Angel Ortiz, LA II, story, is on the  the block where Billy’s Antiques and Props is located.  That wall and that street location is the background of Martin Scorsese’s first movie, Who’s That Knocking at My Door? (1967).

Martin Scorsese directed the pilot, of the HBO special, Boardwalk Empire, and the music in the trailer is by Anton Newcombe of the Brian Jonestown Massacre. The movie we mentioned, starrng William “Billy” LeRoy, Dirty Old Town, directed by the two new up and coming filmmaker sensations Dan Levin and Jenner Furst, also has the music of Anton Newcombe in it.  Not sure why but that block resonates with the sound of fame and music, but it does. –clayton patterson.