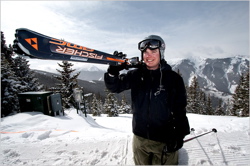 When putting your ego and humility aside takes you to the ski fields.

Out of the Sunday section of the New York Times Styles section comes the self flagellating  tale of (once) upwardly mobile Americans who have had to resort to the type of work which the paper describes was once the sole domain of those individuals who had come from Australia, Europe and South America.

What may you ask these ‘Americans’ are doing? In short they are operating lifts and ladling soup into bread bowls at restaurants in Aspen. Aspen of course as we  all know is a fancy rich man’s place where rich people get to hobnob and occasionally ski. For the longest time the dreary work and existence of some par lives was left to other human beings who weren’t fortunate to be American and living the ‘real’ life. Of course now that so few are living the ‘real’ or let’s just say the preferred life they are now making choices to live the ‘ski bum life,’ because being broke, frustrated and holding onto an MBA degree is no fun in a city where there is no cash flow to go round.

Mr. Robinson has an undergraduate degree in international business and an M.B.A., but instead of job hunting he is working as a chairlift gate monitor for the Aspen Skiing Company. In exchange, he gets $12.25 an hour, a share in a rent-subsidized two-bedroom apartment he likened to a college dorm room and, most important, an unlimited ski pass.

Is this the job Mr Robinson imagined when he got out of school? And yet paradoxically others like Nate Mcdonald who find themselves in a similar position to Mr.Robinson’s had this to say:

“I would have taught and coached for the rest of my life until the time I retired,” Mr. McDonald said. “Now I can come out here and play around for two or three years.”

Can this be true? Displaced Americans who would have gone on to become titans of the world are now enjoying and somehow reflecting on the nuances of life outside of some structured ‘get educated and grab the money’ scheme of life? Of course not everybody is exactly down with this almost too bohemian way of existing in America:

Rachel Geddes, 26, moved to Snowmass in 2008 after working for the American Red Cross in a white-collar job. “My mom is a vice president of a company, my dad’s a surgeon and I’m working in a ticketing office,” she said, acknowledging that the embarrassment was tough to get over at first.

In any event, life is going to continue getting interesting for most Americans and who is to say 5 years from now that operating the ski lift was the premium gravy job of yesteryear when there are no jobs to be had or maybe they’ll still be doing it because being less wealthy, freer, and creatively inspired and enlightened means more than being moderately wealthy, working in a cubicle and living a life that makes no real sense to you in the first place?