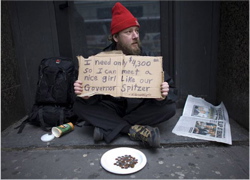 When being poor in America may not be as bad as you think it is.

By now we all know that we are living in a collective economic contraction that has taken a heavy toll on our collective prosperity and even most people’s ability to maintain day to day survival. Of course according to myth, superstition and all those shiny bill boards smiling at you on the streets, life in America was never suppose to be this bad, and if it was it only happened to nasty families, nasty people and all those illegals. Right?

According to a report released by the New York Times long term poverty and reliance on a burgeoning social safety system which is barely that is on the up and reportedly the new way to exist in America.

Call them the new poor: people long accustomed to the comforts of middle-class life who are now relying on public assistance for the first time in their lives — potentially for years to come.– NYT.

Not a very pleasant read at all. But of course what the article doesn’t mention is the profound shift this is having on the public which is collectively disillusioned by the hype that it has been fed since they could say the word ‘mama’ and ‘take me to Mcdonalds.’  With the rich getting increasingly richer and living what appears to be super banal and unnatural lives while most of us suffer and watch in mock amusement at their televised follies  what is beginning to morph is a new approach and appreciation of life.

No longer are people competing to own jumbo homes or validating their existence by the job title or paycheck, since these things are in short supply, instead they are trying to find sustenance and meaning to life via their own self expression and openly critical perspective of what life can be devoid of a capitalistic dogma which has has foiled most people who weren’t lucky enough to be bailed out by 800 billion jumbo bank bail outs.

In essence the whole situation has forced a greater percentage of the population to think outside of the box and come up with ingenious ways to find sustenance and if history is any guide it is these periods of social and economic disarray that creates movements and ways of self -preservation bigger than what preceded them (of course some of these movements led to some nasty incidents and affairs- take the Nazi party for example…).

In the meantime life is diabolical for most people, and not everybody can or wants to be a provocateur or have to come up with a new way to maintain basic survival rights. Then again a close inspection of the system at hand has left gaping holes in its legitimacy to serve its constituents, the alternative is to begin to think outside out of the box or be crushed by the box. And in the event you were thinking of pressuring your local congressman, good luck unless you happen to be a corporate that has more vested interest in place.