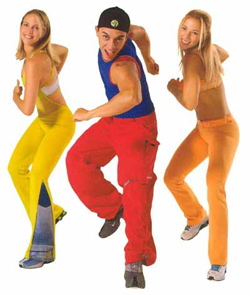 I was recently cajoled into taking part in a Zumba aerobics class. For those of you who don’t know, get out from under your rocks, for Christ’s sake. It’s a latin-inspired aerobic dance craze that has swept through the nation’s fitness centers and taken white middle-aged women by storm. The instructors wear t-shirts that say, “Ditch the workout, join the party!” I wear a skeptical and somewhat cranky expression.

I had no idea what to expect as I dutifully made my way to the back row of the class. I certainly didn’t see it coming. The music came on and it sounded like hardcore Latin club music, with the word “Zumba” replacing any lyric that might make your conservative aunt uncomfortable. I looked at the instructor and she was shaking her ass for all it was worth. She was grinding with an invisible Latin man, having the time of her life. Then came the pelvic thrusts, with accompanying arm movements.

Forty-five minutes later I’m drenched in sweat and can hardly contain my laughter. To be honest, I’m having a great time, and not just from watching my neighbor (who wears sweatshirts with embroidered cats and catchy slogans on them) work her hips in a circle and shove her tits out in front of her like there’s no tomorrow. She pumps her way down, in a circle and then finishes it off by shimmying and lightly caressing her torso.

As I look around, I get the feeling that these women don’t even do this kind of thing around their husbands. And they would be horrified to think that their daughters do this in public on the dance floors of clubs, writhing against sweaty men in mesh shirts. That kind of dancing is scary. It involves loud clubs, strange men and black people.