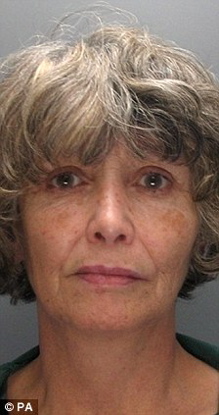 What’s a mother to do?

Francis Ingles was yesterday sentenced to life in jail for killing her son, if that’s one way to put it. The case over in England has touched nerves in the field of assisted suicide. The facts:

A mother who gave her brain-damaged son a lethal heroin injection to end his suffering was today jailed for life with a minimum term of nine years after being found guilty of murder at the Old Bailey.

Frances Inglis administered the fatal injection to 22-year-old son Tom after he was left with serious head injuries when he fell out of an ambulance.

He died in a nursing home in November 2008, after Inglis gave him the injection then super-glued the room of his door shut and barricaded it with an oxygen cylinder and wheelchair to prevent anyone from resuscitating him.

Super glued? We have to say Francis was committed to ending her son’s suffering.

Goes on the Daily Mail:

She gave a tearful and emotionally-charged account to jurors of how she had ‘no choice’ and had done it ‘with love’ to end his suffering.

But a judge instructed them to put emotion aside and told them no one had the ‘unfettered right’ to take the law into their own hands.

Said Judge Brian Barker in his sentencing of Mrs. Inglis:

‘We can all understand the emotions and unhappiness you were experiencing. The fact is you knew you intended to do terrible things, you knew you were breaking societal conventions and breaking the law and you knew the consequences.

‘What you did was to take upon yourself what you thought your son’s wishes would have been to relieve him from what you describe as a living hell.

There’s an expression that if a mother brings a child into the world she can take his back from the world, although we wonder how many of us really believe in this and whether in some critical instances a mother may want to exercise her maternal desires. Assuming they were maternal but even that the law is still the law even if the law can never delve into the minds of a heart broken and emotionally distraught mother.

Indeed what would any mother do?

He was put on a life support machine and brain scans revealed he needed an operation to relieve pressure inside his skull.

He showed signs of improvement but required round-the-clock nursing care and had to be fed using a tube.

Jurors were told his mother was a constantly at her son’s bedside and researched his condition on the internet.

But she was convinced that he would never improve.

In the end Francis Inglis made a decision that she will have forever to live with, even if her son is no longer alive…