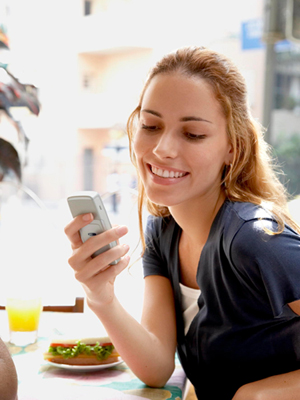 Nevertheless, texting has become a big part of the dating scene.  One must master the art of texting to obtain a date.  Alright, so I meet the cute girl on a Saturday night and obviously I get her number (yea, I’m that good.) Here is the hard part. What do I text her?  Well, it needs to friendly; but not too friendly. It needs to be aggressive; but not too aggressive. It needs to have substance; but not too much substance (OK, you get it.)

Then there is the whole lingo that goes with it.  Most texts start with a “hey.”  Words are abbreviated.  Punctuation that rarely sees the light of day is suddenly coming into play.

OK, here we go.  The text. I suppose I should mention that it was nice meeting her.  I’ll bring up an inside joke of something we flirted about.  I’m sure it was dumb, but at least she’ll know I remember her.

So, here is what we have so far, “Hey – was nice meeting you Sat.  Maybe next time we should hang at a place that we could actually hear each other…” It’s not perfect yet, but notice the subtlety that goes into a text.  First of all, we have the “-,“ which comes immediately after the “Hey.”

This is simply to put a break between the greeting and the message.  Simple – it works. We should also pay close attention to the “…”  This insinuates that the recipient of the text should feel obliged to return the message. Hopefully, she will fire back with something positive, cute, and flirtatious. If we receive something in this ballpark, we are allowed to move further into the texting relationship.

These rules are necessary and perhaps even obvious to most.  The hardest part of the text is figuring out how to make it so concise that it doesn’t look like you put too much time into it. We want what we can’t have. If a person blatantly spends too much time on a text, then it’s obvious that he/she is interested in the opposite person. So, one may have to actually put in hours of time making sure that his/her text looks like it was crafted in a manner of seconds. It’s good to have a close friend or two nearby who is well versed on the subject matter. In fact, the craft of texting is in a way an art form.

Believe me.  I’ve seen guys land models simply from crafting the perfect text.  You will just know when you have the right text.  It jumps off the screen, like a Disney 3D movie.

I would say the best part about the text is politely getting someone off your back.  Let’s say you don’t feel like meeting up with a particular person at the moment.  You can simply text them that you are at dinner, at a movie, or about to fall asleep. That’s it.

This person should have the courtesy to understand the situation and refrain from calling or texting for at least the next twelve to twenty-four hours.  If he or she does call or text after the text – he or she is a psycho.  No arguments about it.

My question is, how long will this fad last?  The answer?  I don’t really know. It has its perks and it has it downfalls.  But it still seems as though we are going backwards.  As I mentioned before, we still have this amazing technology where we can actually speak to another person from thousands of miles away. Have we become sick of talking to people already?

One thing I have noticed is people don’t look at the person anymore when speaking.  I’m not talking about people with lazy eyes either. I mean straight-eyed people.  My hope is that we don’t lose actual human interaction.  Well, at least the humans I want to talk to. Which, come to think of it, are few and far between.  In conclusion, let the texting evolve…