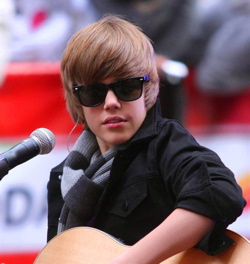 Unfortunately for all of us, Justin Bieber is of an age where his dreams are, for lack of a better word, wet. During his time in the limelight, his voice has dropped a half step and he’s gone through emotional and physical changes that are best left in high school hallways. Of course that hasn’t stopped you from salivating at the thing called the ‘Justin Bieber’ pony show.

Seeing that Justin is still in high school (you remember high school ?) we should like to let you know that Justin has almost escaped the hideous escapade that one endures in dank high school hallways- pimply bullies, awkward growth spurts, inconvenient wet dreams and horrid dental devices. But that’s stuff that Justin doesn’t have to worry about anymore. Why?  Because he’s been saved by rapper/producer Usher and record manager Scooter Brian.

Not bad for a boy who made fun home made tapes “so that friends and family could watch them..’

Of course no high school prodigy would be complete without a ranting mother. Welcome Mrs Bieber. A failed actress who may or not be hoping that her son’s voice will save her, Mrs Bieber has decided a little religious zest might save Justin. Viewing her son as a modern day Prophet (don’t we all view our sons that way?) Mrs Bieber angled for a Christian record company who would sign her good, Christian boy. Instead she got a Jewish music mogul and a black hip-hop star.

In any event Justin has escaped the pulpit, pimply bullies and caused 12 year old girls to flush. With four Top 10 Singles, an ode to our president, Justin is the welcome teenage messiah we’ve all been waiting for.

Justin we are (almost) wet for you too!