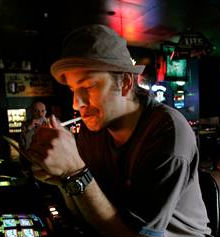 Figuring out how to get your cheap thrills.

Out of the NYT’s weekend style section comes a report that holier than thou ‘fashionistas, hipsters and socialites’ are once again figuring a clever way to trespass and by extension re affirm their cool status in the fickle world of night clubbing. For a while we worried that we were the only illicit smokers in night club venues but it seems the rest of the ‘jet set pack’ is catching on to something we never stopped doing in the first place.

An hour later, there was no longer any need, or attempt, to be discreet. The tiny Lower East Side lounge, where the privilege to spend hundreds on a bottle of liquor is extended only to those fabulous enough to make it past the doormen, was packed and smelled unmistakably of cigarette smoke.

Is there a connotation that only the self perceived fabulous and vanquished are only allowed to skirt the law or rather it is only them skirting the law because of their supposed fabulousness (blah!!) ? Continues the NYT’s;

Six years after New York City passed a ban on smoking in bars and restaurants, it is easier than ever to find smokers partying indoors like it’s 1999, or at least 2002. In November, Eater.com called it “the worst kept secret in New York nightlife” that “smoking is now allowed in numerous nightspots, specifically just about any and every lounge and club with a doorman and a rope.” A few weeks later, GuestofaGuest.com, a blog about New York clubs and bars, posted a “smoker’s guide to N.Y.C. nightlife.”

Well if a GoG is publishing a ‘smoker’s guide’ then  it mustn’t be so much of a secret anymore. Which begs the question are club kids onto something were not? Or is this just a cheap attempt at self validation (after all cheap is most affordable…)?

Says one of the gauche hipsters:

“It’s more of an illicit thrill now,” he said. “Like when you were a teenager and snuck a beer in your parents’ basement.”

The moral of the story- hipsters and the fabulous set are always trying to invent ways to be better than you. We just wish they quit smoking all together…