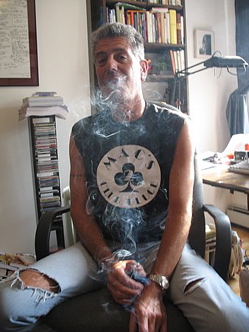 “There will be no Lindsay Lohan jokes,” says Bourdain, poking fun of the party girl while taking his bat to another kilo block of pure, Columbian uncut cocaine in an episode of “No restraint”. Once a chronic drug user, “bad party boy,” treading the Soho streets in pursuit of his next fix, Bourdain’s transformed into an infamously remarkable traveling chef. He wrote of his wild experiences in the early 80’s:

“We were high all the time, sneaking off to the walk-in [refrigerator] at every opportunity to ‘conceptualize.’ Hardly a decision was made without drugs. Cannabis, methaqualone, cocaine, LSD, psilocybin mushrooms soaked in honey and used to sweeten tea, secobarbital, tuinal, amphetamine, codeine and increasingly, heroin, which we’d send a Spanish-speaking busboy over to Alphabet city to get,” (In Kitchen Confidential).

Admitting he’d never in a million years been caught burning cocaine, let alone 600 million dollars worth, “15 years ago this it what I’d ask Santa Claus to bring me for Christmas,” acknowledges the former heroine addict.

Invited to participate in the destruction of the highly illegal matter by the director of National Security himself, if you watch the video closely you’ll surely hear sniffling undertones. Covering their faces with masks, you’ll likely notice there are a few bona fide holes in Anthony’s mask, as well! Did the police not notice this?

“It looks like Keith Richard’s Bedspread back from the seventies,” he says, pounding away the bricks with knives and bats with a dozen or so police assistants. Saddened by the forced deed, Bourdain has had to learn to burn cocaine AWAY from his nose, if he’s going to impress and win over the public.

“I’d like to say this is the first time I’ve cooked cocaine, but that’s not exactly true,” he says, just moments before lighting the dreadful match. Kaboom! Likely to have snuck away that day with a couple rocks in his pocket, Bourdain made a good choice attending the sorrowful disaster, and met up with Lindsay that very night!