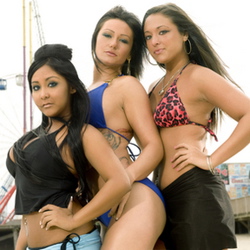 The contestants of Jersey Shore are coming under fire, yet again. Not for their tans, their atrocious fashion or their refusal to be anything but a stereotype. Now it’s for their buffoonish behavior in LA as they make their fist pumping way through all the gifting suites.

It seems the nation’s latest guilty pleasures ditched several scheduled appearances and made their way through every gifting suite they could, grabbing everything they could get their ‘bronze’ hands on. Snooki was seen asking for a white watch because it, “makes me look the most tan.” They got bags, drinks, jewelry and all for free. One headline reads, “Jersey Shore Rapes Gifting Suites.”

Now, I ask that we take a step back and look fully at the situation before passing judgment. Let’s be honest: how long is this little infatuation with the Jersey Shore going to last? This is not a Lindsay Lohan length obsession. This is a Agyness Deyn fad at most and I hope these buffoons know, deep down, that the nation will one day cease to chuckle at their antics.

Their cohorts in the suites will, for the most part, have a longer run. They’ll have a little more time to get free stuff and have their ass kissed so I hope they refrain from judging them too hard. Unless one of the Jersey kids punches someone in the face. It’s common courtesy to leave that kind of behavior on the shore.

Italian Americans annoyed that MTV wants to air the truth.