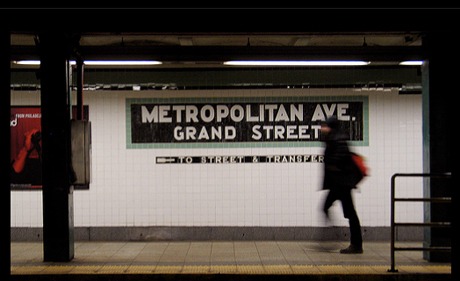 The G train is akin to a slinky rattlesnake making its way through a Western shoot out with a myriad of characters languishing on the saloon floor while licking at the collective backsides of Prada make believe outfits and drug dealer type looking dudes effacing the most holier than thou cool expression as the blood seeps out of them. The G train for most parts is a callous dog with little regard for life except for that of it’s ruthless owner and the hapless repartee of sleep deprived yuppies, hipsters and the stolid working class that have forever owned this rabid terrain. A bastard of a child the G train service makes little apology when and if it decides to sliver to your neck of the woods. It exists to surprise you, torment you and yet perversely it exists as the barometer of the changing landscape of New York City. In short the G train is the hottest slut on the make and as two timing as she is the suitors can’t get enough of her…

It’s a Tuesday morning, circa 8.30 am and I’ve decided by chance to make an experiment of the bitch called the G train. Leaving a debauched session with fellow friends I am compelled to make it home wherever home is. The platform sign in front of me says Carroll Gardens and by the sight of the slightly vexed yuppies (vexed because they are yuppies supposedly forced to live in this part of town…) I can tell that everyone manages to take showers before they set out in the mornings and even dare to color coordinate the occasional dress or shirt. They stand there before me, lawyers, yoga aficionados and the usual cafe latte drinkers that they all purport to be. Everyone is apparently well behaved, dressed and mindful to never look one another in the eye (an unsaid law in the NY subway system). As soon as the train pulls in they are respectful, obliging and even mindful of not taking up too much space.

By 8.36 am we’ve just left Bergen street, a lofty stop past Carrol Gardens with a well heeled gentrified crowd. Unlike the yuppies that live closer to Smith st these yuppies seem to have a belligerent type of pride. They have consciously chosen to live in their above ground abodes with their sprawling bookstores, French patisserie stores and perverse predilection to chocolate bon bons and fine fleeced sweaters. Unlike most people who live in Brooklyn, these people seem to exude a pride that can be found by those that have acquired a fondness for charming brownstones on charming streets, charming husbands and wives and the occasional charming adulterous affair if it suits their taste. It’s only when we jerk into Hoyt/Schermerhorn street, one stop over that the dregs of society seems to openly exist.

Rowdy, randy, obtuse,overweight and already half dead this lot reek of a cluttered ‘jabberworky’ class that one sees toiling clerical offices, soup kitchens, the local court offices and frequenting dingy dollar stores after quick power diets at Burger King or other preferred high fructose corn syrup diners that exists in their path. In essence they are the borough’s underbelly that has always existed to preserve the colloquial affairs of the Brooklyn district and the sight of black pee stained tiled station walls hardly makes them wince. Nevertheless they get on and off, shuffling between one platform to the other, half asleep, paper coffee cups still in their hands with unamused expression their daily mantra.

As we slide out of this cockroach infested behemoth we suddenly find ourselves sliding into Fulton st– the bastion of gentrified bastards who managed to buy into Ft Greene even while for most of it’s life until the late 1990’s was a crack dealer’s haven and with the local thorough fare officially called Myrtle avenue everyone implicitly knew that it was really called Murder avenue. Of course that was then and this is now and the stench has long gone with the visage of hot girls and the young executives that like to court them. I stare aimlessly at one couple who seem to be deep in love, their matching expressions and Burberry sweaters slightly turning me off. By this stage I have already decided to forgo getting off at the next, Clinton-Washington where I have lived now for the last 2 years for fear of further unsettling my nerves and the land lady who lives directly above whose rent I am once again late in paying.