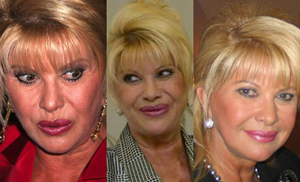 Redefining the meaning of ‘bitch.’

It seems Ivana Trump got to piss a lot of people this weekend. Reports D Listed:

The Orlando Sentinel reports that Ivana Trump, who was seated in first class, went off at some children for running through the aisles while they were waiting to depart from Palm Beach, FL. A flight attendant tried to fix the situation by offering Ivana a different seat and some headphones. Ivana refused and became even more cunty. Ivana called the children “little fuckers” and told everyone around her to “fuck off.” The Delta plane, which was bound for NYC, was forced to return to the terminal.

When they got to the terminal, a few deputies boarded the plane and asked Cruella de Trump to get off. After Ivana gifted the deputies with a few more Dlisted-approved words, they escorted her off. Ivana was not arrested and she won’t be charged for her acts of cuntery.

We suspect that someone may have half looked the wrong way at Ivana and that naturally only set her off. As reported by the NY Post who can never resist taking a dump on Ivanna…

‘Ivana Trump‘s meltdown on a Delta-Northwest flight from West Palm Beach, Fla., to La Guardia wasn’t the first time the divorcée ran afoul of fellow passengers. Just months before she was taken off Saturday’s flight pre-takeoff after calling nearby children “little [bleep]ers” and berating flight attendants, Ivana acted “miserable that she was put in coach and not first class” and spent her time “complaining the nearby children were acting like monsters,” Page Six reported in September.’

Ivana as we all know is rightly used to first class treatment and having the latches of infidels she deems far below her thrown in dungeons buried deep in her rectum. That said one can only commiserate with Ivana that children still exist on the planet Earth.

Plus, sources say, two summers ago — on a stopover in Athens en route from Nice to Mykonos for a party — Ivana was so abusive to airline personnel, they wouldn’t allow her to board, and she had to take a later flight.

Our suggestion is as follows- burn all the children, let Ivana light the first match, offer her a bottle of finely chilled Moet, a trust fund session that she can extort unwitting customer’s money before kindly been forced to sit in coach class with the ugliest and rudest child that ever existed after Ivana.