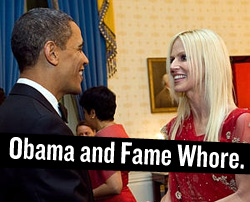 How to con the public.
How can you forget them- the White House intruders seen coddling up to vice president Joe Biden and Obama at a head of state dinner party. Everyone looked beautiful, everyone was smiling, happy to be there- except there was one problem, not everyone who was there was supposed to be there. This of course led to a public outrage when the Salahis posted their stunt on facebook. That said the fun is set to get bigger and better- if Bravo who is seriously contemplating the idea of giving the Salahis their own reality show. The only thing that Bravo has to work out is there actually a market for such dribble (yes the answer is yes- dribble always sells in high abundance especially if coated with your favorite fat free corn fructose additive…).
Not sure if they can really pull it of Bravo has decided to go fishing by conducting an online poll. Let’s see if we can help Bravo make up their minds.
Survey questions below;
1/ If you were stuck on a desert island with the Salahi’s would you be tempted to have a conversation with them about the meaning of life or keep the conversation strictly focused on the lack of fresh water.
2/If you were to host your own dinner party would you be thrilled or disappointed if the Salahis crashed uninvited?
3/ If you could have an affair would either Michaele or Tareq Salahi who would you choose and why?
4/ If the Salahis adopted 8 undernourished children would that inspire you to watch the show?
5/ If Michaele Salahi announced that she too had an affair with Tiger Woods would your curiosity to watch the show improve?
6/ If the Salahi’s had fist fights on the show would that too inspire your desire to watch the show?
7/ If President Obama and his wife Michelle Obama became the racial next door neighbor doofuses on the show would you be tempted to watch the show?
8/ If the Salahi’s started smoking crack, meth or just shooting up dope on the show would that pique your curiosity?
9/ If the Salahi’s adopted Lindsay Lohan as their cocaine addicted daughter would that also inspire your desire to watch the show?
10/ Finally, if Bravo decided to give the Salahis a reality show would that aggravate your opinion of Bravo or would you perceive it as brave new world show casting?
Bravo Tests Waters For Salahi Show – NY Post