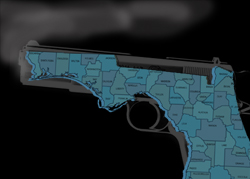 Trying to understand our love affair with mass shootings.

It’s been a horrific back to back last couple of days with the country erupting in mass shooting sprees that are leaving people dead and injured in the most random absurd fashion. What gives?

The latest report has it in Florida – With 8 or more people shot and 2 confirmed dead, authorities have locked down downtown Orlando, Florida, looking for a man who shot up an office building earlier today. As of going to press no one quite has an idea where things stand except that the assailant Jason Rodriguez is still on the go.

Perhaps it’s better to say no one really ever knows why these things happen but one thing’s for sure we live in a culture where such behavior is pandemic and almost de rigeur in the minds of unsettled individuals.

Gawker reports: The shooter is described as wearing a “blue shirt and jeans.” No one knows a motive. The suspect walked into an office on the 8th floor and opened fire. And according to an unconfirmed local news report, there were bodies found on the 8th and 10th floor of the building.

The catch phrase being no one knows the motive, but really the bigger question is why is this kind of behavior happening in the first place and why does it seem to always happen in the US- especially the bible belt states?

As of right now, the shooter-Jason Rodriguez is still on the loose, running on rampage emotion and from the law. Ultimately we are all running with him as it seems we are lost and hell bent on rectifying something in our collective minds.

America is getting wilder and more exciting (terrifying) day by day and now we are all of course getting scared.