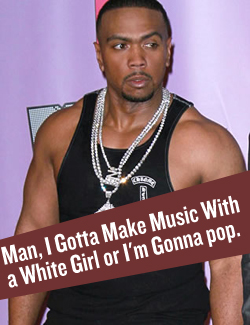 If you dont listen, he will certainly break your teeth.

Timbaland, best known for his ridiculously addictive songs and collaborations with Justin Timberlake, is coming out with his new album called: Shock Value II. And the shock value cometh. He has collaborated with none other than teen-tart Miley Cyrus.

What is this? Some ploy just to garner a younger audience? In what land does putting Hannah Montana with Timbaland make any sense? Is Miley trying to prove to us once and for all that she is not a pop singer? (fyi, YES YOU ARE, Miley Cyrus aka Hannah Montana).

The more shocking part of this news is what Timbaland said about Miley. ““Man, she’s gonna be like Justin [Timberlake]. She comes from that same musical background, where she’s just got it. Her voice is just there. The best way to put it is, she’s special. When I worked with her, I was very impressed. I was like, ‘Whoa.’”

Ok, that is understandable, Miley has a good singing voice. And yes, she is talented— not just any child can be put in her place and do the stuff that she does. But Miley Cyrus as the next Justin Timberlake? Bitch, please. Just to name a few reasons why not,

A) she’s a media whore

B) she has atrocious writing skillls (remember her twitter rap? )

C) I don’t think her gyrating on some dancer is going to be too appealing to her audiences’ mothers.

But, who am I to judge? I never thought that the curly-haired ‘N Sync-er would bring sexy back. We’ll all just have to eagerly anticipate the single to air.

Is Miley the Next Justin Timberlake – Perez Hilton