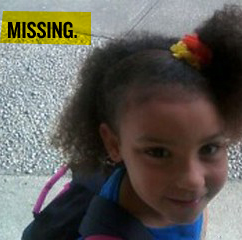 The search for Shaniya Davis, the 5-year-old who has been missing from her home since Tuesday, has taken a singularly unpleasant turn. Reports are now emerging that police have arrested the girl’s mother, Antoinette Nicole Davis, citing that she “knowingly provide(d) Shaniya Davis with the intent that she be held in sexual servitude” and she “permitted and act of prostitution.”
It appears that the girl had only been living with her mother for three weeks at the time of the abduction, because her father, who had raised her up to that point, had wanted to give Davis a chance to be a mother. “I never should have let her go over there,” he said on Saturday.
We all know that there are some nasty people out there, who will do almost anything for money or publicity or whatever else drives them, but to exploit and jeopardize— or in this case (allegedly) directly harm— one’s own children in the process adds a level of inhumanity that we find hard to digest. There’s been a lot of it around lately, with the boy in the balloon, and a similar case in the UK last year where 9-year-old Shannon Matthews was found hidden under a bed with her stepfather’s uncle, 24 days after her own mother faked her disappearance. It’s hard to comprehend how a maternal or paternal instinct to protect one’s children at any cost could be so completely absent as to move from neglect to outright abuse, and yet it happens every day, all over the world.
“I just want her to come back safe, my friend,” her father has said. “I love her very much and I hope she is OK.”
In the meantime, police, who until now had hoped to find Shaniya alive, are searching along a highway for her body, reports FOXnews.
Missing Girl’s Mom Charged With Human Trafficking – ABC News
North Carolina Police Search Along Highway for Missing Girl’s Body – FOXnews
SHARE
Facebook
Twitter