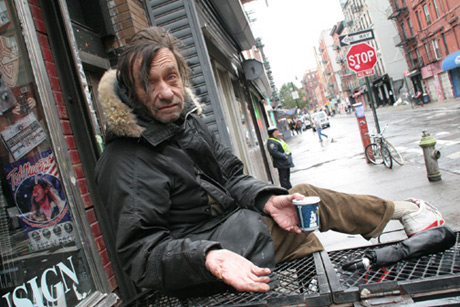 Bloomberg loves us, wants to protect us, save us. He wants to make us financially secure. At least that is what he promised when he used his enormous wealth to flip the democratic process on its head, go against the will of the people, and to buy off City Council to get the “right” to run for a 3rd term.

The reason Bloomie gave for buying a 3rd term was that the economy of the City of New York is in serious trouble and he, being a financial wizard, can save us. I am sure our lovable old Mayor’s a financial wizard because he has been able to take his dollar a year salary and transform his personal wealth of 7 billion dollars into 15.5 billion dollars. Now that is an amazing trick. However, that is good for him, but what about us? NYC’s fortunes went in the opposite direction.

I thought Bloomie was our Mayor, our Boy, our Friend? Why isn’t what’s good for him also good for us? Money is real. How come he ends up with so much of it, and we, the people of NYC, are losing so much of ours? This kind of mental trick (making the voters of NYC think that he can save us by gathering most of the available wealth for himself) reminds me of a similar kind of trick pulled last Christmas on Patrick Downey.

Patrick Downey lived on Ludlow, which is now one of the most popular streets on the LES, thus one of the most profitable for landlords. Patrick is crippled. He cannot walk. For more than 20 years he lived in a basement. There has been and still is a bedbug infestation crisis on the Lower East Side. Patrick was told that his apartment had to be fumigated so he could not stay there while the apartment was being cleaned up. The landlord got him placed in a hospital for a couple of days and then proceeded to throw all of his belongings into a dumpster. When Patrick returned home the landlord told him that his space was an illegal apartment so he had to move.

The landlord, being a generous soul of the same ilk as Bloomberg, promised to pay Patrick a $150.00 stipend each week for one year. It became one of the saddest LES Christmas stories I have ever witnessed as Patrick got the first week’s cash as he was chucked out the door, and then, having no place to go, just laid in front of the building for more than a couple of weeks. We tried to do something, but the landlord had tricked Patrick into signing a paper that put the former in the right, legally. The weather was cold and wet. We would call an ambulance to come and take Patrick to the hospital, but he would always come back. The money stopped and Patrick, not willing to go to a shelter, eventually just disappeared.

This is the classic Dickens Christmas Carol, except that this Scrooge (Bloomberg) doesn’t develop empathy for those less fortunate. A one-bedroom apartment in the new luxury Ludlow building goes for $4,000.00 per month.

The Bloomberg Empire made up of the rich is eating up our community. It is like a plague of locusts gobbling their way through the old Lower East Side.

And if you want to hear another enraging story, go online and check out the Lower East Side Economakis story that is another of the “World according to Bloomberg” histories. In short, the rich Economakis decided he just had to live on the now gentrified LES. Like Bloomberg, a man with a vision based on only his own needs and desires, decided that 45-47 Third Street, a double wide, 6 story building, was the place he had to live. Problem was, there were 15 families in the building. No problem, according to the law, the landlord is entitled to one space. This Maddoff, excuse me Bloomberg, excuse me, Economakis, said the one space he needed was the whole two address 6 story building. And guess what— Economakis won his case. Excuse me.

Clayton Patterson is a historian, artist, and filmmaker who has been documenting the changing of the Lower East Side for decades.