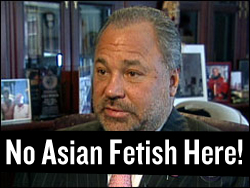 When you don’t look American enough life can be miserable…
Looks like Katie Couric is back on the receiving end and we only hope you’re lapping it all up, because from where we stand the spilled porridge looks awfully delicious if not a tad trifle stale. But then again, why should that stop you from licking your fingers. Yummy. Making a sport of picking on Couric who is supposedly too liberal and had one too many plastic surgery operations is confounding Bo Dietl, a former George W. Bush appointee.
Talking with charmer Don Imus on his morning radio show (who himself has gotten in trouble in the past for making own special, racist comments) Dietl had this to say (start lifting that spoon to your lips, kids):
She looks like a Halloween cartoon. She’s got her eyes pulled so far, she’s starting to look Chinese herself. Enough with these face lifts, alright Kate.
And enough with the young guys Katie. You’re over the top baby. You’re over fifty. Start going out with guys your own age. This cougar stuff don’t work.
Cougar? heaven forbid. Katie didn’t you know you’re supposed to be dating rich fat men your own age? Really Katie and this thing about looking Chinese – what’s up with that? Of course, after Imus interjected and called Kouric a rodent Dietl had more stale porridge to offer-

You like her eyes the way they look? They’re getting smaller and smaller.”

“Ten years ago, she looked American,” Dietl remarked. “Today she is an Oriental.”

In the end, you have to applaud Dietl and Imus because there is no way these two men could have taken themselves seriously and neither should we. Pity about all the spilt porridge on their t- shirts…