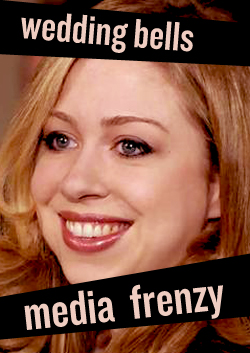 When wedding bells are dolloped in political sugar and hard to get rid of stains.

Yummy, bliss, sweet sumptuous swooning and a heartfelt groan that ugly duckling and hedge fund sweet heart is set to marry her beau and, by extension, our beau too— Marc Mezvinsky.
Report the Daily Beast which seems to always have a handle on hard to get rid off gunk-
After months of false reports, Chelsea Clinton and Marc Mezvinsky are finally engaged to be married, some thirteen years after first meeting at a 1996 Renaissance Weekend networking event in Hilton Head, S.C., where they were reportedly introduced to each other by their parents. This weekend, the pair wrote to friends:
Yes parents will be parents…but please let us find out what the two fateful lovers wrote to their friends (please take out your sugar pop spoons to succor to…)
We’re sorry for the mass e-mail but we wanted to wish everyone a belated Happy Thanksgiving! We also wanted to share that we are engaged! We didn’t get married this past summer despite the stories to the contrary, but we are looking toward next summer and hope you all will be there to celebrate with us. Happy Holidays! Chelsea & Marc.
My god, we’re just gushing and blushing. Please Marc and Chelsea we don’t mind the mass email at all (except of course the part we never actually received the news first hand – oh well- blah blah!)
Of course, like us, you’re probably wondering if Marc is going to make a good boy (cause we know Billy and Hillary would never take too well to naughty play…). Continues the Daily Beast:
The question now is: What’s her future husband like? The New York Times describes him as “bespectacled, mop-headed… known for his confidence and teasing sense of humor” while the Washington Post calls him “an underdressed, wet-haired Goldman Sachs investment dude”.
Golly, investment dude, money bags and political insider, are we allowed to salivate? But there must be a catch right?
Well there is kids-
Ed Mezvinsky (Marc’s daddy) spent five years in jail for a number of financial crimes—many related to his susceptibility to Nigerians with email accounts—and was released in 2008. Unlike Clinton, however, Mezvinsky is Jewish—though Chelsea is said to be learning more about his faith.
Oh well, Chelsea gets to become Jewish and gets to have interesting tea sessions with her future (criminal) father in law, we’re sure Bill and Hillary will just cope.
Chelsea we love you and we wish you a happy marriage even if your new husband is about to drive you crazy…
The Daily Beast
Chelsea Clinton Engaged
SHARE
Facebook
Twitter