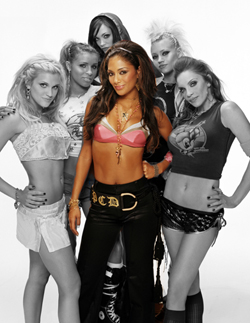 The ever so present on the scene group that started off as a burlesque troupe in LA, are going on a “break.” What’s that? Is that the dropping of a fork in the distance from the shock? Or just the clatter of someone accidentally dropping his or her fork who doesn’t give a fuck?

Although this group consists of five members, who really can you name other than the lead singer Nicole Scherzinger? Well supposedly these girls must have let fame go to their heads because in lieu of the break, the group members have been voicing their distaste for the lead singer. Kimberly Wyatt recently said, “I get on with most of the band but not everyone. Look, at the end of the day it’s a job – we all have our own lives to lead and our own projects going on…I think of Nicole as just a business associate not as a friend. You cannot simply group girls together and just expect them to get on, can you? Life doesn’t work like that.” Isn’t your job to be part of a band? Doesn’t that mean be a team? Does that mean you aren’t doing your job? Honey, life doesn’t work like that either.

Could this just be a self-important side chick horning in for attention? Could it be jealously over the fact that their lead singer is the one with the champagne flute brimming with success and fortune? Or could it just be that maybe Nicole is an attention-whore and these other members are demanding their time in the spotlight?

Who knows, but one thing is for sure, this “break” shouldn’t last too long or the world will forget in a snap. Another statement by Kimberly, “If Nicole left tomorrow, we could still carry on. I can see this band going on forever.” Right.

When the Hollywood ego strikes…