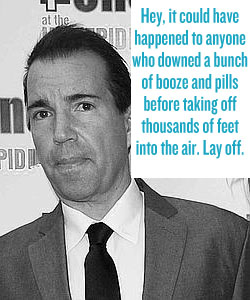 How to intimidate passengers and the flight crew a 35,000 feet up in the air…

According to gutter journal the NY Post (which we secretly adore- sort of…), honcho about town Richie Notar managed to humiliate himself on a recent flight on American Airlines from Los Angeles to New York. How may you ask? By becoming the in house flight entertainment and terrorist that you secretly crave when you are bored and flying 7 miles up in the air. That said, let’s find out how Richie turned you on. How to become a mid air freak and get away with it.

Initially when Notar boarded the plane he was acting normally, (whatever that word means) when suddenly mid way into the flight something delicious started happening in his brain:

But hours into the flight, his demeanor changed. “His arms were flailing and he was shouting. Everyone was looking at him,” said the witness.

“A little while later, the woman seating next to him had to be moved to first class after claiming that Richie had made ‘inappropriate hand gestures’ at her. Two women behind him were moved as well,” our in-flight source related.

“A male flight attendant was seated in the aisle seat next to him trying to calm him down, but Richie was just gesticulating wildly. Finally, the crew managed to get a pair of flex cuffs on him, though he tried to bite them off.”

Yummy- Richie wants to give you a private air show- hand cuffs and anti social behavior and all. Prey, what could have caused the mid air melt down? Let’s find out kids.

Notar said he had taken a pill and downed a glass a wine and was “out for the count.”

Drugs, sleeping pills, bad mood, temper tantrums- why not?- just a day in the life of a super honcho trying to give fellow passengers a whiff of his brilliance.

And how does Richie feel about life back on the ground?

I guess I have to be more careful, or there go my upgrades. I have to learn not to try to make it down the aisle to go to the loo in turbulence.”

Well that all makes sense, after all – we’re all prone to going a litte crazy once in a while. Lucky for Richie his freak charges were dropped.

The moral of the story- even super honchos are freaks, but you kind of knew that didn’t you?