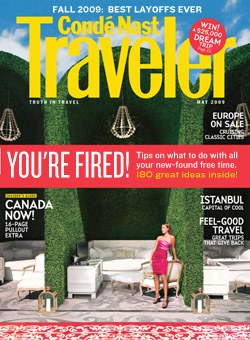 Watching the big hatchet get to work over at Conde (Cunt) Nast(y).

Looks like we are in a real recession after all kids. Or maybe it’s just Conde Nast looking for a clever reason to get rid of a certain class of ingrates in society- the journalist. Off with his head, who needs another blogger talking about LILO? Off now we say!!

According to Gawker (who we suspect know something about journalism but really don’t like to let on…oh well) the kids are all crying in their bathing trunks and this years (or is it last year’s?) hand me downs. From what we understand the grim reaper has come to roost on 180 hapless victims who we trust will eventually rehabilitate and join the rest of society as semi functioning members.

Bearing the brunt of managerial incompetence, the despised lot will be spending the balance of the day being carted off to never ever land while the fat cats (so we are told) get to live another day and look for other horrible deals to enter in with the hope of relinquishing more media jobs.

It could all be that no one really cares about media anymore, or rather the type of media that has been presented to date and it should serve as no surprise (Gawker are you listening?) that people are fed up and want out. Which has, we think, facilitated an appreciation for other kinds of media or maybe simply a desire to escape the cultural paradigm that has nominated 23 year old girls like LILO the Queen of American Life.

It could also be that print is out and that the internet is in but that of course shouldn’t hide the fact that most media is phony and ill conceived (see it’s just not management that’s being incompetent but the journalists themselves as well).

In any event, our sympathies with Cond Nast employees. But think of it this way- you are now free to write plays and novels and for once inspire instead of discourage other human beings.

When Conde Nast comes looking for you, be the first to volunteer. The hangover will be gone by mid morning.

Close to 200 Layoffs at Conde