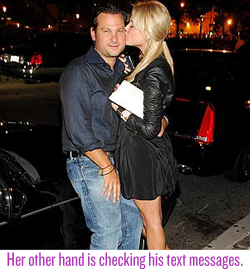 Publicists who become freaks and then go to jail.

Ali Wise once ruled on the social circuit but now is on her way to prison because she just couldn’t contain her jealous rage. What was she exactly jealous of? Of all the new girl friends of her ex boyfriends! Naturally.

Bummed out and taking things to her own hands, this society princess used high technology to hack into unsuspecting women’s personal devices and get even with them. She was subsequently able to get into their voicemails countless of times, eavesdropping and even deleting those that did not meet with her favor, prosecutors said.

Of course if you can do it once or twice why not 337 times?

She hacked into their respective voicemails a total of 337 times, listening in and zapping messages at will.

Other alleged victims have come forward anonymously to The Post to accuse Wise of repeatedly busting into the voice-mail systems of her perceived romantic enemies and competitors — and again listening to and deleting messages.

Perceived enemies. Well now that makes lots of sense. In that case, can we send Ali over a list of people wed like to see her torment the hell out of?

Of course, we all know that a publicist isn’t a publicist unless they have an avid appreciation of how to use phones. Whether taking a shower, swimming breast stroke, or even while experiencing orgasms (trust us even we have marveled at this feat).

In the end, poor Ali was led away, but how she was led away only amazes us more. But really, once a society princess, always a princess (even in the clinker we think).

Yesterday, Wise, 30, clacked into Manhattan Criminal Court in her Louie Vouttin stilettos — wearing head-to-toe black — and was told her legal troubles have quadrupled. She now faces four counts each of computer trespass, eavesdropping, computer tampering and aggravated harassment and (sadly) only one count of stalking.

Trust us, there’s a movie somewhere brewing in some movie producer’s head. Let’s just hope Ali doesn’t erase it from his brain first.