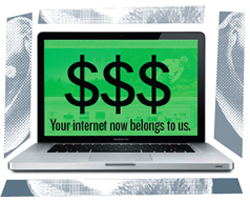 There’s one thing that worries the bejesus out of big corporate entities and that’s smaller entities giving away content for free that itself is trying  to peddle for a fee. Of course it isn’t long before everyone finds this out and leaves the corporate in a very ugly state of affairs. Welcome to the world of the internet, where for a while David was able to give Goliath savage black eyes but it looks as if Goliath just found himself a sling shot that is destined to blind David and by extension your pocket book. So much for competition…

Aggravated by the existence of Hulu, Comcast who has lost millions of dollars in ad revenue and subscription fees has been thinking how to rid itself of the pesky fly that provides free TV content. For a while it came up with nothing but now has a potential deal to block Hulu out of the picture.

Comcast is in talks with NBC Universal about pooling their entertainment assets into a new company that would own 30% of Hulu in addition to the NBC network and cable channels such as Bravo, E! and Syfy. Comcast would control the new entity and possibly have the clout to push Hulu to begin charging for access to some of its most popular shows, including “It’s Always Sunny in Philadelphia,” “The Daily Show With Jon Stewart” or “Psych.”

Hulu, a partnership between NBC, Fox and Walt Disney Co, was initially realized as a way to combat internet piracy and You Tube but since Wall st has been complaining about massive drops in network p and l’s the networks have had to re think their plan and remember their devout obedience to Wall st and the capitalistic system which underwrites their existence.

The Moral of the Story: The Capitalistic system is not in the business of free but cold hard cash and never forget that!

Will Hulu make you pay to watch?