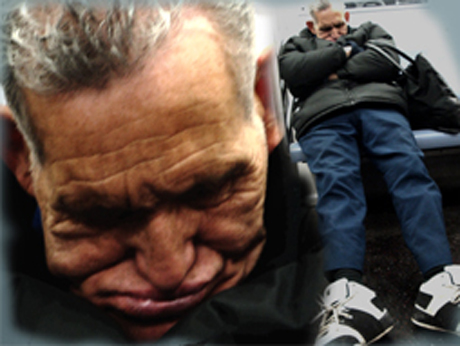 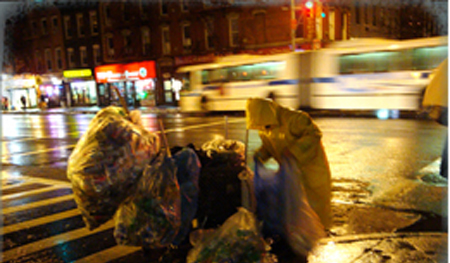 I’ve worked with Brian Donovan, a photographer, an illustrator, a fine artist, an aspiring writer and, above all, an advocate, on a series of projects that have quite literally brought us from the depths of homeless Brooklyn to the heights of Middle East mosque minarets.
In each of these instances, he has understood the power of the artist to touch the humanity of his subject and to communicate that humanity to the largest possible audience. His is a spokesman for the forgotten. He is an advocate with the eye of an artist. And, he refuses to be silent for any reason. Promotion of the self is not secondary to Brian. It does not exist. Just as the plight of his subjects usually do not exist in the minds of our readers.
That is why, when I asked if I could run a profile on this burgeoning talent, I was surprised when Donovan said yes. Recognition for his own talent serves no purpose to him and, as such, would serve to offer me only a denial. I was surprised until I received the e-mail with the attached article(below).
Here was Brian hijacking my article, hijacking this website and, ultimately, creating yet another outlet to remind us of his mission. In any event DONOVAN manages to wow us again. Read for yourself…
Craig Dershowitz.
Reality is painful. Perhaps that is why we have come to find ourselves in a culture that manufactures infinite forms of escapism, especially in the realm of entertainment. Distraction can serve a healthy purpose, but my fear is that distracting entertainment is replacing meaningful content altogether. Start listening in on the adjacent cubicle at work and you will hear what consumes the American psyche, it’s mostly bullshit.

We let politicians tell us blatant lies, with little or no objection because most prefer the entertaining gossip about reality shows. The so called politically active spoon feed each other meaningless statistics about polar ice caps, yet say nothing about the starving homeless in front of their very eyes. We have even created a generation of children spending their adolescence in the artificial environments of video games and the internet, literally coming of age in the electronic jungle of escapism.

Between Facebook status updates and the recent media coverage dedicated to Kanye West, its obvious that bullshit has taken over all available media. So Before I too become infected with the BS virus, I’d like to reflect upon a time when actual content mattered and people had the courage to create art that reflected reality. I call this era the dawn of photo journalism.

It started with Jacob Riis in 1890. A newspaper reporter who went deep down into the dangerous slums of New York City to photograph the wretched living conditions of city tenements. Which, in his day, consisted mostly of European immigrants and runaway slaves. Riis spent over one year photographing and writing about the reality of day to day life in the slums, providing the world with such an intimate view of urban poverty, that you could taste the tuberculosis on the breath of his subjects. So vivid were his photographs that when he published the collection, “How The Other Half Lives,” it triggered a chain of progressive legislation to improve living conditions. A little bit of content can go long way.

Mandatory windows had to be installed into apartments that had no source of light or fresh air, and legal limitations were put in place to govern the unlimited power of slum lords, (Just to name a few.) The list of positive change brought forth from Riis’s photography is actually much longer. And this all went down under the most corrupt city government New York has ever known, Tamany Hall. Now given the impact of his work, doesn’t today’s media seem totally useless?