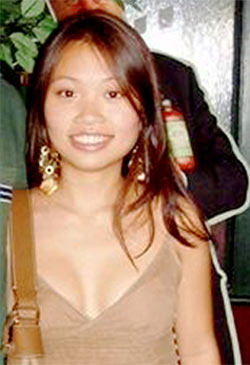 When the media makes a girl’s death your untimely death too,

We’ve been reading with intrigue how the media has been handling the slaying death of Annie Le, 24 of Yale University who went missing before 3 days before she was to be married here in NY.

Is it that she’s a Phd student? A striking looking girl? Or because she was going to Yale that makes her death more important than the other 809 deaths/ murders that go on every day in America. Why is it that her death is more important to us?

Is it the way she was killed? (after all it is said she dies of traumatic asphyxiation, gruesome but not as dramatic as been gunned down or is it?) Is it the person that she was to marry? Is it her social standing? Her fiancés social standing? Is it because she rose to a prominent level? Or rather that she was rising to a prominent level and was cut down by a random killer that disturbs us? After all everyone likes a winner, some one who works hard to live and become the American dream, and perhaps Annie is symbolic of that effort?

What makes for a good story is what we wonder? The drama? The name dropping? The celebrity factor? Is going to Yale then synonymous with Yale? Is being ivy league too exclusive? Would Annie’s death had mattered to us more or less had she been going to Queens college? Would Annie’s death also mattered less if it was revealed instead of being a Phd student she was a clerk at Duane Reads? Do we care about the deaths of clerks who work at Duane Reads? What about if Annie had a police record or was a crack head? Would the TV shows and papers still be interested in her story? Is she the perfect victim we all fear being ourselves? Assuming we are perfect or rather living towards prophesized as being ‘perfect’ in the greater culture? Would you really be interested in Annie’s death if she was engaged instead to a professional but an out of work lay about that Annie had to perform tricks after her shift at Duane Reads to support them?

When is death important to us? And who’s death makes it to the covers and whose doesn’t?

When death comes round sometimes it matters that you’re young, beautiful and were on the way to becoming a star or already one, otherwise we just watch the cartoons….