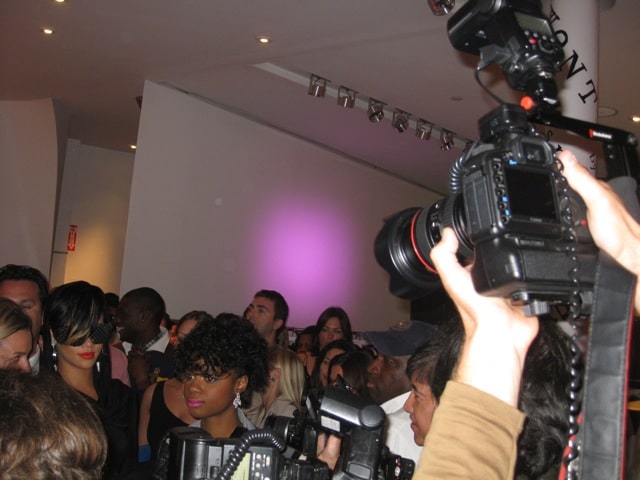 As I’m enjoying my first round of Patron, surveying the scene, hanging with Scallywag’s publicists Sonia Anand and assistant Alissa Lentz the whole place nearly erupts as Rihanna now makes an appearance that I”m sure will be all over the place. I literally saw grown men falling over themselves just to get a picture of the Trini’ Songtress on their iphones. Coming from L.A and seeing how people get starstruck, I had no Idea what was in store for me that night! Just when I thought I had seen an unusual sight. The place went nuts when Anna Wintour made an awkwardly short appearance as an unplanned photo op ensued.

I looked as that to be my great chance to escape the world of extreme excitement and as I walked to the front of the store to exit crazy town that had temporarily rented our INTERMIX and was told that I couldn’t  leave because Sienna Miller was coming in. Do you hear that? I couldn’t leave because Sienna Miller was coming in, and all the while I was pushed into a sea of photographers by a guy who could of easily been considered a girl for Halloween. Hilariously annoyed but confused and spirited I watched how people ran down the street in hopes of catching a glimpse of their favorite stars. I later heard that Anna and her entourage ended up being chased down the street not by the paparazzi but by people just hungry to get their lick of fame..

All in all, I have to give it up to all the superstars who actually made an appearance on the streets of NY for Fashion’s night Out, you braved some crazy people to be out! That’s how serious people can be when it comes to fashion. I think It was good to see people that excited about something to spend money on when the realizations of what its because of, is nothing to laugh at.