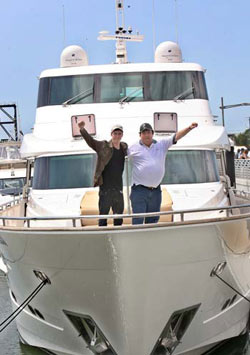 When buying your daughter a birthday gift causes you lots of headaches.

Like most countries in the world – Australia is feeling the pangs of a world wide recession. That said that didn’t stop Clive Palmer (who at best only feels the onslaught of heart burn after eating one too many caviar) who as one of Australia’s richest men in the world (estimated worth – 6.5 Australian Billion) dropped a cool $5 million Aussie dollars (think $4 USD) on a yacht for his daughter’s 15th birthday.

Now the media in Australia is chasing him up and down the street and demanding that they share in their national mourning for the death of their collective wealth. The only problem with this is that Palmer has effectively had no loss on his collective wealth (after the first billion really what does $5 million really matter?

Concerned that he’s sending the wrong message to society (never mind the message the same journalists were sending when they were yelping up irresponsible spending habits that brought the demise in the first place) and that rewarding little Emily such a vast gift for her birthday is sending out the wrong message that conspicuous consumption is okay. (funny it used to be okay for such a long while….)

In any event when you’re the king you can do pretty much as you please, it’s just when they stop writing about you and beating you up on the street (or in this instance the yacht) do you ever really have to pay attention to the masses.

Money goes a long way if you’ve got it, until maybe the day you don’t…

Clive Palmer ‘showing off’ with $5m yacht for daughter