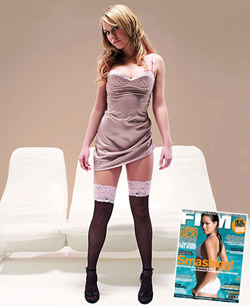 When bad behavior and fame become an Atlantic fascination.

Welcome to the life of Chloe Madeley resident bad girl of London who from time likes to visit NY, get completely hammered and make a scene (kind of like Lilo when she makes it over to London). We may not know her by name (yet in NY) but you may have remembered her being the one being tossed out of the Carlyle Hotel bar and scrounging on the street looking for her fags, while the English press went to work.

Scallywag behavior aside we were intrigued by Chloe who has tried (and up to date failed miserably unlike her American peers) to use her parents fame and good names ( Richard and Judy Madeley entertainers themselves) to set herself up in show business.

Booted off after 6 weeks for low ratings on her parents own afternoon chat show (and vitriol like responses by audiences who were appalled by the smug Chloe- a character trait which usually ensures American starlets like Lilo more public exposure) and then once again booted off the payrolls of ‘Now’ Magazine after being caught smoking cannabis on camera.

Things of course only continued to get worse for our girl Chloe after she smashed her parents Peugot while drink driving (see the similarities…?) and has been labeled by the English press as a liability. A paradox because in the US she would be classified a misunderstood child of very well to do parents and would within 7 minutes be offered a new program and not to mention an opportunity to model for countless periodicals (of which Chloe gets to at least still do).

Our advice to Chloe, screw the English, they just don’t understand you, come to AMERICA and hang with Lilo we’re sure you’ll be smashing more cars, abusing deli boys and landing your next reality show.

When young famous girls misbehave we call them celebrity, in England they call it trash. Oh well

Drugs, all-night parties, arrest for drink driving – can anyone curb out of control Chloe Madeley?