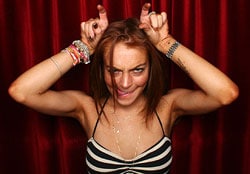 Is Lindsay secretly holding out for a more meaningful role when one is waiting for her right now?

We read with intrigue in gutter journal the NY Post (which we secretly love) that actress, celebrity and trans coastal (and Atlantic ) bimbo had declined to star in the upcoming ‘summer block buster,’ –The Hangover.’ The role of stripper ended up going to Heather Graham, of course that hasn’t stopped us from wondering if Lindsay should have used this as an opportunity to show movie goers that she’s really a good sport and doesn’t mind having fun at her own expense.

Theories at the Scallywag office have us thinking one of the reasons Lindsay turned down the role was because the role was unfortunately ‘too’ realistically based on Lindsay’s life, and as much as she may have considered the role – the fact that she was always in a drunken stupor just emotionally unsound literally would have preempted her from turning up to the movie set- (good advanced thinking Lindsay…)

Other theories circulating is that Lindsay is waiting for more meaty intelligent movie roles that she will more aptly sink her teeth her into (after she’s of course sunk her martini in ).

In any event, the thing about being a Hollywood star is that you get to call your shots and we can’t wait to see what movie vehicle Lindsay eventually chooses seeing as most movie roles (or let’s call them real life made for prime TV ) have admittedly run their course and it would be kind of nice and very weird seeing Lindsay playing a repressed about the turn of the century heroine with existential woe permeating her soul.