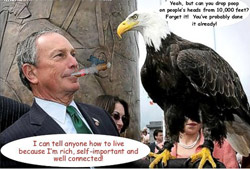 Mayor Michael Bloomberg joked his way through Judge Sotomayor’s confirmation hearings. Proving, once again, that politics is a laughing matter.

With so many elected city and state officials ruining whatever little credibility politicians still had with scandal after scandal, providing fodder for comedians, blog humorians ™ and newspaper editors, it is nice to see Mayor Bloomberg ahead of the curve.

Rather than allow himself to become the punch line of jokes or, even, answer to well-conceived criticism, Bloomberg has taken to the offensive, becoming America’s funniest mayor. He extends most of his speeches beyond the opening quick amusing one-liner to small stand-up bits, channeling Jerry Seinfeld or Henny Youngman. He is all shtick.

And, Joe and Joanne Value Meal ™are slopping it up with a biscuit. This would be an opportunity to hold myself up as an elitist New Yorker if Mike hadn’t honed his style to great perfection within the five boroughs. While I thought we were more sophisticated than to fall for his shucking and jiving, apparently, we are not. In fact, we are about to call the man King for a Third Term. The coronation will include a rubber chicken.

Knowing his history and the intense intelligence and business acumen he is known to have, I am left with only two choices concerning his charade of buffoonery. Either his wit is the logical progression of the down-home, common sense he has applied to so many topics (i.e. the school system of New York) or it is a two-step designed to lower the already bottom-feeding discourse in politics. While I begin to play my DVR’d, syndicated Scrubs episode and ignore the final day of confirmation hearings, I hope it is the former but fear it is the latter.