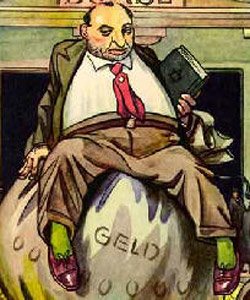 Congratulations for more cheap thrills and trailer trash journalism. You can all fart at Gawker when inclined…

Never ones to allow good taste, journalism or editorial standards to stand in the way of shameless promotion and sensationalistic headlines, GAWKER.com in a post entitled, Wait, is Tyler Perry Jewish? has, seemingly, gone the way of Communist Russia, Nazis and a small portion of the people Borat and Bruno meet and repeated the implausible, silly and inciting anti-Semitic accusation that Jews control the media.

The post, a discussion of the 10 richest men in Hollywood, reads:

“Tyler Perry makes Forbes’ list of 2008’s highest-paid men in Hollywood. The children of Israel round out the list. So they control the movies and the banks! How do they do it?[/Film]”

Although I am hopeful and willing to give the benefit of the doubt that this is one of those crazy “snarky” comments – snarky being the twitter era equivalent to sarcasm – I do wish that Gawker, a well read, popular site, be slightly more careful about how they word things. I mean, give me an air quote or something here. I consider myself a pretty thick-skinned individual, but using such an old stereotype really offends. I mean, I’d prefer my hate to be more original then this.

Since the topic has been raised, it is important to note three things:

1. There are many influential men in Hollywood who happen to be Jewish. There are also many who happen to be bald. Many others who happen to wear glasses, drink wine and, I am sure, take showers. Why isn’t anyone running around screaming about a potential SOAP or GRAPE CONSPIRACY? Artists 4 Israel knows a number of starving Jewish artists who would love to get in on the goldmine if such a thing existed.

2. The reason there are so many Jews in the movie industry is because, during the era of Jewish immigration to America from Eastern Europe, Jews were routinely shut out from other, at the time, more profitable industries. This is why there are so many Irish cops – you got that, O’ Malley?

3. If you look at the list of Hollywood’s top grossing males who have been circumcised, an astounding fact emerges. A majority of them are extremely gifted actors, writers and directors such as Steven Spielberg and Larry David. How about this for a conspiracy theory – Hollywood is controlled by talented people! No? Ok, I don’t know if even I buy that one.

Now that that is settled, I welcome Gawker’s retraction.