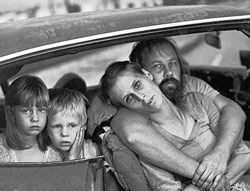 The advantages of being homeless…

We read with intrigue in the NY Times today about a policy that Bloomberg has been using to deal with homelessness in New York City. Faced with the increasing costs of taking in families that have hit the wall Bloomberg wants to let you know that he still he cares about you and your family.

With shelter costing up to $36 000 per annum for a family Bloomberg and his crew have devised a ‘fun’ way of dealing with your unsavory fate. They will fly you back where you came from on the house. Assuming you have someone who will vouch for you and let you stay with them Bloomberg and crew will wait a few days (so as not to pay top dollar for air fare vouchers) and get you as far as is politically expedient for Mike Bloomberg.

Granted there are probably some of those who are happy to just call it a day and be spared the ignominy of having to live in the shelter system, and struggling with a city that doesn’t give much unless you’re photogenic, well groomed, connected and just plain lucky to manage the housing and employment equation.

The question that arises for us is whatever happened to attacking the central issues that have led to people ending up homeless?

What kind of culture do we live in when we shuffle those less fortunate than us on a one way ticket while kissing and making out with the glam and celebrity factor?

Mike- let us just say for the record we wont be endorsing you for your third, fourth term (when does it stop?) unless of course you fly us out to a return trip to our choice of locale, frills and balloons included. By the way Mike you needn’t come with us either.

Cosmetic surgery for a wound that keeps bleeding unabated. The smart things politicians do so you can live in a ‘fun’ part of town…