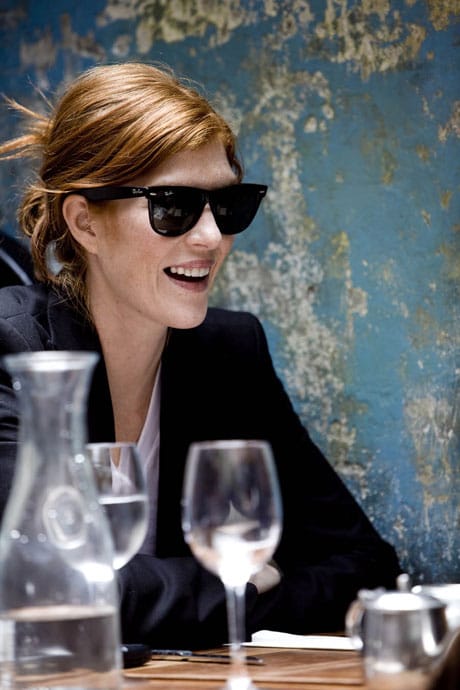 SCV: What’s the difference between a socialite and a celebrity then?

A.V: Well…I think a celebrity has to work at becoming famous, and that’s what they’re famous for – for whatever they’re a celebrity of, being an actress, an athlete, a politician…And being a socialite, you’re famous for your family and your upbringing and how many charity events you go to, things like that.

SCV: So being a ‘socialite’ is a career of its own?

A.V: It is a career of it’s own. It really is. I had to cut out a lot of stuff in the past year, just because it was too much for me. Three parties in one night, bouncing around to two huge charity events, changing clothes during fashion week in the cab or in a bathroom to be in the designer’s clothes for the show, that they want you to wear, that they’ve sent to you and put you in the front row….It gets crazy.

SCV: So you’ve had to consciously make room for your acting ambitions.

A.V: Yes. I’ve just signed with Cinematic and I’m really excited. It’s the first real manager I’ve ever had. So, I’m really just getting into this. I had my head shots done. That was yesterday. And I’m also working on a T.V show.

SCV: Is it a reality show?

A.V: Yes. The premise is New York ‘social’ people and what goes on. It’s really about relationships between each other. I play the girl who’s the real socialite and there’s someone from Social LIFE Magazine who’s in it. There’s someone in Fashion PR. So it’s, from all directions, getting into the socialite scene.

SCV: If someone watches you in a reality show, do you find it silly for them to assume that they’re getting your reality, even thought it implies that?

A.V: I would say a lot of it is hammed up for the camera. A lot of it. It’s fun. It’s a docu-drama. Some of it’s real, I’m not going to lie. We shot two pilots and they’re hilarious. They’re really fun. It’s something that I would want to watch, I would want to see more of.

SCV: What do you think it is about Reality TV shows that has everyone gaping?

A.V: I think it’s the new thing. People want to see “real life” things. I’m not saying that all of [the show] is totally off-base with us, because it’s not. It’s very real in a way. And it’s just good T.V. I want to become a brand, you know. I want to get into film and a lot of other things, too.

SCV: What do you mean by becoming a brand?

A.V: I’m talking about the end of the road, you know, the final ‘what I would like to accomplish’ as in my own line. My own jewelry line, eventually designing pieces. Or I would love to design a home line. I love interior design. It’s all an extension really…

SCV: Capitalizing on all the opportunities present.

SCV: And how important is the modeling to you?

A.V: I don’t really mind what happens with my modeling. I’d like to do it when it’s convenient and it’s not going to be the top of my priority list. Although, I would like to do commercials, campaigns -that sort of modeling.