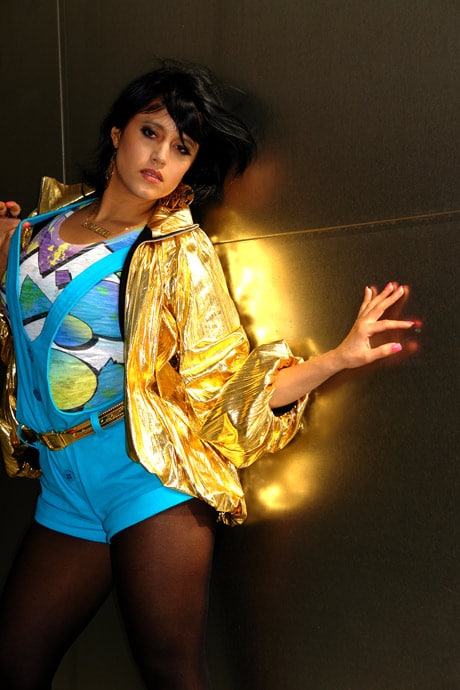 Meet Catherine Wentworth at a party or hanging out with friends and you’ll come away from the encounter thinking, “What a nice, sweet, intelligent girl.” But catch one of DJ Cat’s Pussy Parties or watch one of her videos on Youtube and her blatantly sexual subject matter and suggestive half-smile will leave you reeling.

DJ Cat, a.k.a. Catherine Wentworth, is one of New York City’s hottest commodities. She’s DJed in almost every sort of venue you can think of, from high-fashion clubs like Lot 61 and Bungalow 8 to downtown rock and roll dive bars. She’s toured Asia, Europe, and Australia, and she’s worked with other well respected artists such as Felix Da Housecat, Automatic Panic, and Arthur Baker. And not only does she DJ, she also writes and sings her own electro-dance songs.

She just finished up a short tour in Texas and Italy (always a winning combination), and is currently working on an album in LA. She took some time out to talk to us about the brainwashing of America, her sexy side, and society’s double-standard for women.

SCV: So I know you started out working in fashion photography. How’d you end up getting into DJing, and how’d you get into electronic music?

DJC: Well, I moved to New York after switching from photojournalism to more high-end fashion work. I worked with Pier 59 Studios doing photography, but ended up doing a lot of party and event production and organization as well. I hired Mark Ronson to DJ at this Entertainment Weekly party I was planning and got into this long conversation with him about music. He was like, “Hey, you know a lot about music, you should really think about DJing some time.” I had another friend who was doing music for a small rock and roll bar on the Upper West Side, and he invited me to come along and check it out. So I went there and had a great time, and from there I’ve been lucky enough to get more work and meet other people that have helped me out in my career by hiring me to work at clubs or private parties that have really given me a lot of exposure. I worked at Lot 61 and Bungalow 8, then I started doing small events for celebrities. I also did a few raves because I love electronic music, and things just picked up from there because I started getting more international attention when I moved more into electronic stuff.

SCV: Why do you think electronic music is so much more popular in Europe and Asia than it is in the US?

DJC: People in America are brainwashed, man! It’s so different here than it is in other countries, especially in Europe, because the US is so spread out and huge. People just don’t have the same kind of access to that kind of music that they do in other places. Small town America is stuck with their radios and MTV and VH1, so if something isn’t popular in the mainstream media, it’s hard for them to find out about it. Europe is much more compact. New things get shared a lot faster, and for the most part people there are just a short drive away from a city with a great music scene. And I think what people in the US might not realize is that electronic music is an evolution of rock and roll. If you listen to long rock tracks you can hear a lot of similarities between those and the beats of electronic music.

SCV: How much do you plan before you go on, and how many cues do you take from the audience as far as the play list?

DJC: I have some things in mind when I go that I want to play, but I usually wait until I get there so I can check out the crowd and see what they’re into and what the mood is. Different venues and nights and crowds always change what I play, but actually I see the biggest difference in preferences when it comes to international crowds. Tokyo kids love fast and crazy music; Italy loves minimal electronic; Spain likes hard rocking stuff, and England likes this crazy, wonky, banging electronic sound.