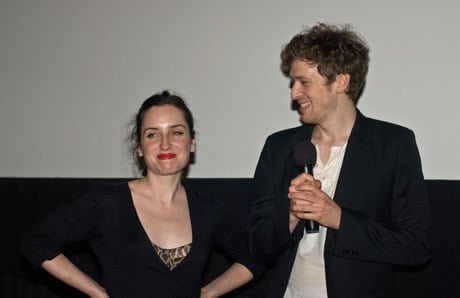 Rarely considered accordingly, film can be easily considered the crux of artistic expression. Integrating all manner of emotion-piquing writing, music, performance, and visual arts into a fusion of brilliant cinematography, filmmakers are at the cutting edge of artisan enlightenment that can still touch the masses. Defying classical social distinctions between high and low, film and its proponents can appear casual or elite; they can demand monarchial treatment or insist on being ignored; their masterpieces can be lewd, horrifying, comedic, intelligent, or deeply emotional.

The Brooklyn International Film Festival exemplified these characteristics with an unpretentious virtuosity. The awards night brought everything together in a culmination of ingenuity and the acknowledgement thereof. Held at the Brooklyn Heights Cinema, the festival had that satisfying indie appeal to accompany the enticing and brilliant professional films that it entailed. The awards night was held in similar fashion to the screenings and their Q-and-A’s—inside of a packed theater humming with curiosity, interest, and anticipation.

The winning film was well accepted, and well deserved. Titled Breaking Upwards, a narrative following a Brooklyn couple who, faced with the claustrophobia of codependence, had decided to contrive their own breakup while supporting one another through the process. Directed by (and starring) Daryl Wein, it was his narrative film debut and proved that his name is worth looking for if one is interested in a compelling story without extreme modulations in tempo and strong and complex (although not overwrought) emotional presentations. Although the incidence of “how?!” and “why?!” is rather typical at awards ceremonies, this particular award, though for a film in very good company, could have been forecasted.

The after party, a deliciously low-key soiree at the Speak Low in Dumbo, was where I had the pleasure of speaking to so many master artisans, including Daryl Wein, Zoe Lister-Jones,(Wein’s co-star) and the coordinator herself, Susan Mackell. The party was eclectic and socially satisfying; attendees were gracious, personable, and witty, but in no way attributing themselves undue importance (unlike as our editor Scallywag thinks they have at some other festival’s, not that we didn’t like the Tribeca film festival).

I was able to catch a couple of words with the mastermind behind it, who, in response to my introduction, gave me dap (handshake: across palms and around thumbs, then curled over fingers, and concluded with a pound, or the gentle colliding of fists).

SM: I am very pleased. We’ve had over 700 more submissions than ever this time around, and the films—did you get to see any of the films?

SCV: Yes indeed, they were amazing.

SM: Weren’t they? They were all incredible, I’m very impressed. I loved watching every one of them.

SCV: And, what did you intend to bring to film with this festival?

SM: We’ve been doing this for 12 years now, and every year, we have new amazing filmmakers who get to come together, showcase their work, and have it recognized. Of course, it keeps getting better, but we’ve never had a bad year.

Moments before he left, I was able to catch Mr. Wein and costar, co-screenwriter, and co-producer Zoe Lister-Jones:

SCV: So, you won (The Grand Chameleon Award)!

DW: Being honored at a festival is incredible, especially considering the state that we live in—we shot the film out of New York, in Brooklyn—the Brooklyn Film Festival is amazing, and it was they who honored us.

ZLJ: …and it’s a very practical award, because it’s just going to help us make out next film, which is great, it’ll really help us get it done when it would have otherwise been so difficult.

SCV: I see! And how’s that going, with your next film?

ZLJ: Yeah, it’s great, we have the script written and everything, we’re just looking to fund it now—

DW: …right, now that we have money for the camera package, it’ll help us get it off the ground.

SCV: Wonderful! Congratulations, I wish you the best!

ZLJ: Thank you, we really appreciate it!

Impressed to nearly two dimensions, I left the party only wishing I were more involved. Alas, I was but a square writer in a roundly inspiring film festival, but indeed, they are a true representation of the contemporary artisan, and that much I related to.