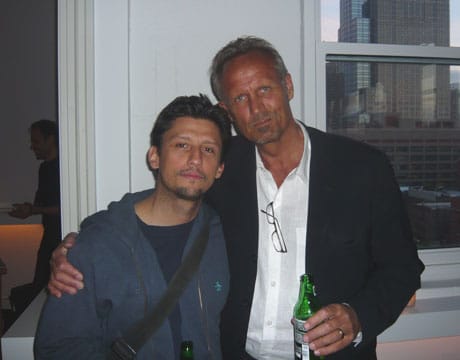 “Photographers are damned fine people and make up a hell of a party crew,” I wrote in my notepad, having already been drinking for several hours before I arrived at Carnaval Night. The Brazilian-themed event, sponsored by several camera equipment firms and held last Wednesday evening at Tribeca Skyline Studios, was one of those pleasant and interesting parties that actually serve a purpose. In this case, Pro-foto was hosting a demonstration of its Pro-8 Air, which as best as I can tell is some sort of magical mechanical box that emits light or redirects light or at any rate has something to do with light.

The magical box was, it seemed, a very big hit among the assembled photography professionals. Two demonstrational photo shoots had been set up at opposite ends of Skyline’s penthouse studio space. One featured several dancing girls dressed as gypsies or some such who twirled around and jumped through the air and otherwise stayed very busy, and the other setup was equipped with a trampoline. The purpose of all of this, it was eventually explained to me, was to demonstrate the extent to which the inter dimensional witchcraft box could facilitate clean, non-blurry photos of fast-moving subjects, which is presumably a very nice thing to facilitate when people are running around in dresses or jumping on trampolines during photo shoots.

Then again, most attendees didn’t seem to be photographers insomuch as that many of them were properly dressed. I suppose I should note that I am of the opinion that photographers do not dress well. I can’t remember how or why I came to this conclusion and I have no idea if it’s valid, but it is my opinion and I own it. Still, it seemed that this would be a good opportunity to put my ridiculous hypothesis to the test, so I scanned the crowd in search of the worst-dressed person present and then struck up a conversation with that person.

“Are you a photographer?” I asked a haggard-looking fellow wearing a garish red t-shirt and baseball cap.

“No, I’m with the band,” he replied, pointing to the words “Manhattan Samba” printed on his t-shirt. The guy was of clear and severe West European barbarian ancestry and bore the same Irish sunburn and semi-crazed demeanor one finds among Texan uncles. At any rate, you’ve got to admire someone who manages to find success in the Samba circuit despite having not a single Latin bone in his body, and playing under such a name as “Manhattan Samba” to boot.

Having failed the photographer experiment, I wandered around a bit with my date (who happens to be my ex-girlfriend and who makes a good date to such events because she already knows about my inability to behave myself and thus won’t have cause to be disappointed). At some point, we were approached by a fairly misshapen and not-at-all attractive photographer who, I noted in silent triumph, was badly dressed. During a few moments when I walked off to get some cheese and crackers, he apparently asked my date if the two of us were going out, to which she replied, “I fly solo.” And do you know what the photographer said in response? You would never guess it. He said, “Maybe we can fly together some time.” This is seriously what he said. So now I have concocted a new hypothesis regarding the inability of photographers to hit on women in a competent manner. I just never learn.

The evening was otherwise without incident. The two of us figured out where the waiters with the appetizer trays were most commonly to be encountered in their ongoing treks across the studio and then we stayed at that location. At some point, we observed that one or two attendees had acquired little hamburgers, but we were ultimately unable to locate the source of them. It didn’t occur to me to simply ask one of the people with the little hamburgers where those little hamburgers had come from. You would think that I would have thought to do this, but I didn’t. I’m not, like, an investigative journalist. 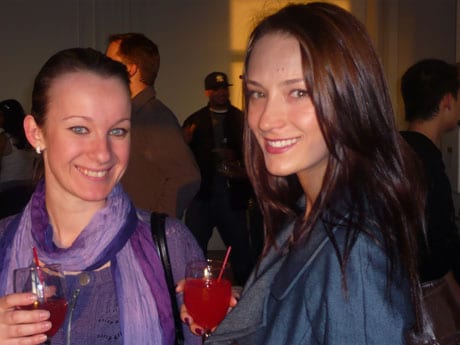