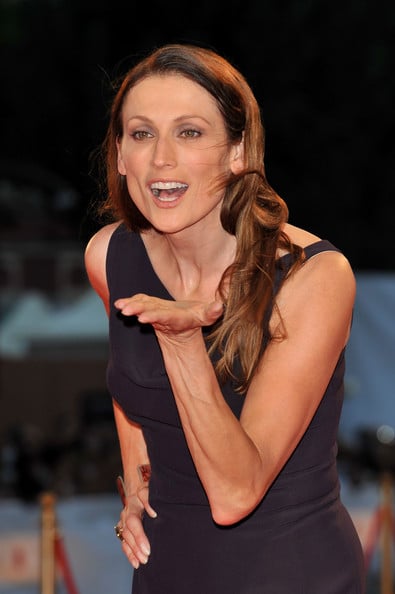 Nancy la Scala is one of those actresses living the dream that so many actresses dream of but so few actually realize. On the back of her recent starring role in “Vegas; based on a true story,” playing at the Tribeca Film Festival, a gritty film that won accolades, including the honorary mention for best picture at the Venice Festival last year and is positioned to be nominated as one of the best new pictures at the current Tribeca festival we caught up with this remarkably talented actress and discussed her recent ascent.

SCV: Tell me a little about the film – ‘Vegas: based on a true story,’ directed by award winning director Amir Naderi.

Nancy: It’s a film on one level about a woman who tries to keep her family together in the midst of temptation on the outskirts of Las Vegas. They’re living day to day with all these skeletons in the closet and then one day someone comes and tells them they’re living on a jackpot. Fine, but is that what you say to recovering gamblers?

SCV: What happens then?

Nancy: I think what happens is on some level an allegory to what has happened to the American dream. The pitches, the ludicrous desire to keep up with the Joneses. It really makes you wonder about what’s really real and the illusions one sees over and over.

SCV: How was it that you came to the attention of Amir?

Nancy: It was uncanny, one of my friends was asked about the lead role, and she said no actually whom you need to talk to is Nancy La Scala. So there I am one night talking to Amir, who by now is in Vegas, scouting the area, by phone when he asks how soon could I be in Vegas if I were to audition for him.

SCV: How soon were you there?

Nancy: The following morning. I just booked a plane and got myself there. I was there from 11.30 am sitting on the floor of some motel room until 5pm later that afternoon, when Amir turns around and tells me he wants me to have this role.

SCV: So what happened next?

Nancy: I literally transformed myself into this role. We spent the next four months living like the characters. I became a housewife, cooking meals for the crew, put on twenty pounds, felt the oppressiveness of our confinement and essentially became the woman in the screenplay.

SCV: It reminds me of Daniel Day Lewis- when he was played the central character of the movie ‘My left foot,’ who refused to function with anything but his left foot, during and for a while after the shoot was over. Of course it won him the prize for best actor later that year.

Nancy: That’s the commitment that’s sometimes required. The camera never lies, it registers every feeling, nuance, the way your character holds a cigarette, peels an apple. These are things you have to absorb if you are to give soul and physical presence to a role.

SCV: So how was it being on the set, how did it transform you?

Nancy: That’s interesting. I don’t think one can affect transformation unless one themselves are transformed. Being in Vegas, especially the outskirts was a real eye opener. It was a peeling away of perceptions, of getting to the core of some heart truths. To be honest, the whole thing would leave my completely drained, and I’d just sit there for hours after we’d wrap shooting too transfixed to want to say anything.

SCV: I was reading somewhere when Amir likes to make films he always promises to take his character on a journey, that they will inevitably suffer and be exposed to many incongruities but once they make it to the other side, once they reach their destination they will be forever changed. What do you think?

Nancy: Yes, it’s very true. Making this film took a toll on all of us, I think at some point we were all ready to kill each other, but that’s when you know you’ve got the character down, the emotional journey intact. It’s when somebody sitting in a dark room watching the movie can give themselves the permission to feel everything you’re feeling on screen.

SCV: I’m curious what’s the crux of being an actress?

Nancy: It’s the ability of being able to take words and speak them and make them real, to connect with them emotionally and physically.

SCV: How did your acting career begin?

Nancy: I’ve been very fortunate to sustain a career as a model and as a commercial actress. So there I was a few years ago making this commercial with famed director Peter Smilee and he turns around and asks why I’m not in Hollywood making the real bucks. That’s when I started thinking.