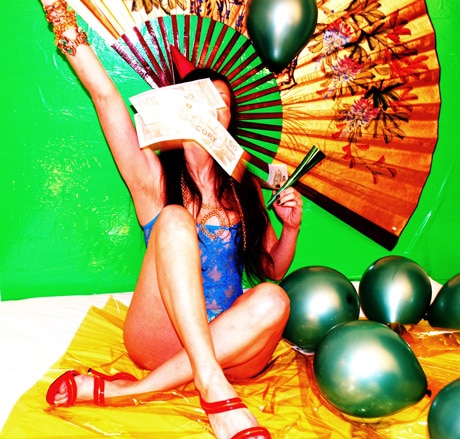 Gold-diggers (women who marry for money and status): they’re much savvier and smarter than they lead on. How hypergamy, the seeking of money and higher status informs women.

There’s something to be said of gold-diggers (is that what we’re calling it these days?) but from my research on the internet, they’re much savvier and smarter than they lead on. They’re organized, they know what they have, know what they want and that includes a pre-nup in their favor and an all-inclusive trip to Barbados for two (kids stay at home with the French appointed nanny).

I’ve written so much about marriage and relationships, I can barely stand the sound of my fingertips rapping against that keyboard, but another assignment, another 6 gin and tonics + Google.com later, and we have YET another relationship inquiry on our hands. Do women marry for money? Absolutely, but there’s also the not-so-secret world of men who do, well perhaps that’s an article for Scallywag himself.

I hosted a dinner party a couple of weeks ago, and relationships and money came up. Everyone knows women usually prefer (ahem) men who are financially stable. It evokes a cave-womanesque instinct of provider. (I know, I know, FEMINISIM, yakkity-yak-yak-yak…) Be that as it may, there isn’t woman in cyber space reading this that would say “Wow, both bachelors are amazing, have the qualities of a perfect gentleman, but you know what? I”ll take the guy on E.I., I’ll be HIS sugar-mama”. Then the topic steered towards the financially un-savvy female type (Ahem. Me.). My dear cousin was quick to provide some insight:

Him: Oh sure, men love broke-ass women. Makes them feel like knights in shining armor.

Him: No. That was sarcasm. (Obnoxiously loud sigh) You really need to get that locked down…. (shakes head).

That night was especially disappointing because I quickly found out I am not only undesirable to the opposite sex (in more ways than one) but I am also gullible as hell (which probably adds to first point, OR if I play my cards right, detracts from it? You say there’s a party in your pants and I’m invited???) …. Sigh….

According to several modern “gold-digger” blogs (they also call themselves “Smart Women” blogs), the ideal way to approach a relationship (marriage) is in the form of a corporation. You are seeking out new employees that will work for you. There is an interview process (dating?), a trial probation period (the engagement?), and then you’re hired (pre-nup signed and you get a gold ring! Congratulations you’re the proud new owner of a silicone bearing, ammonia blonde wearing and 6 inches of heel toting Lynzee Stauss protégé!)

Gold-diggers these days come in two categories: there’s what you’d expect with the capital T & A, blonde and perky. But the hybrid “Smart Woman”, is different. Tougher. Less Perky. Less Blonde. She has her ‘i’s dotted and her ‘t’s crossed. She thinks about stock options. She longs for a mortgage. She has a decent career. And she won’t settle for anyone unable to provide less than. “Smart Women” are being more demanding, and unabashedly so. If you’re a man, without a financial plan, or a stock option in the money your application will be quickly withdrawn, recession or not.

Meanwhile, this not-so-“smart” woman is practicing that starving artist routine, and perfecting it as the days go by. What does it really mean to marry into money or a man that is motivated by it? You see the old cliché everywhere, luxury SUV driving mom, aggravated that her Philippino trained nanny can’t magically cure the twins’ A.D.D, her manicurist messed up her French tips again, all of these elements overcompensating for the fact that instead of getting laid (like a woman in love should be) she gets answering messages from her husband on the golf course.

To be motivated by money is a lot of hard work. I suppose it depends on what you want out of a marriage. If it is a corporation, be sure the tanned, No hablo inglés speaking pool boy is part of your share of the pre-nup. You really want to make sure you get him, because all companies one way or another, go through (sometimes a hostile) corporate take-over, and you’ll need a shag and a drink when this one’s done and over with.

Speaking of a drink and a shag, I’ve been broken up with for far worse, but most of the time it’s because I don’t bring enough to the table. Ouch. Little ouch. But I’ve learned from relationships and finances. You have to be on the same page and learn together. I may be a starving writer, but I love it. I may wear clothes unsuitable for the 70s and re-invent them, jamming them forcefully into a new millennia, wearing outfits not even my mother would call me “cool” in, but hell, I haven’t had to put up with Sorry babe, gotta go drink top rail scotch and smoke cohibas with the boys in a real long while (I did once and I think a piece of my soul broke off and fell into a black hole, never to be seen again).

No amount of Chanel and Tory Burch can be worth that Scotch-Cohiba-Golf Course-Hell, can it? Then again maybe I haven’t seen the right pair of Tory Burch flats…

Relationships and Finances are inseparable, especially for the long-term, heavy union. You have to talk about money, but honey, there’s more to life than that. Isn’t there? Or am I in some self-inflicted romantic fairy tale bubble? I certainly don’t expect anyone to rescue me from my ‘woes’ (not that I’ve ever described my situation as that, I just don’t have thousands upon thousands of dollars of disposable income). They’re woes if you make ‘em so.

For me, marrying for money would go as poorly as any situation could. I don’t like children, so raisin’ young ‘uns would be, ugh, an interesting ‘social experiment’ at best (You mean J.D. doesn’t cure what ails a 3 year old? Who knew?), cooking I can only do out of love (being motivated by money is not enough, welcome to burnt toast Tuesdays!), and actually consummating a love-less, money inspired union inflicts my gag reflex worse than a live, “heartfelt” Coldplay performance (and no one makes me vomit like Chris Martin makes me vomit. Well, at least I’d keep my figure?).

Having a financial plan is one thing, but more important than that, is finding a partner who will stick it out through the worst of times, planned or not (*cough* RECESSION *cough*). Is it any wonder that during recession periods, divorce rates spike? Sometimes a man with a plan isn’t enough…. So I suppose I have to stick to what I know best: starving at writing. Let the smart women do what they do best, I’m sure they’ll know what to do with the Cohiba’s when their Clinton’s come along.

Justyna is also the Creative Director over at thedinnerjacket.com