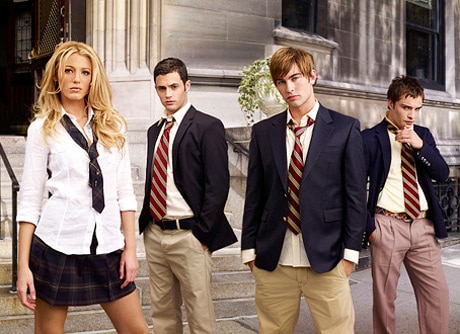 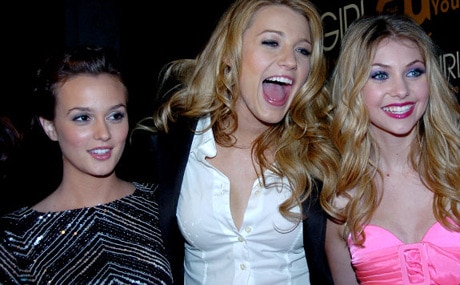 It seems that Chuck’s rainbow is missing a color.

Gossip Girl is part of a vast right-wing conspiracy promoting a uniquely Christian agenda. In this highly disappointing season, the Sex and the City refugees, soon-to-be single mothers currently in Junior High School, perverted old men hoping for another 15 second clip of Blair in designer lingerie and my girlfriend have all been treated to one tired, clichéd and sorrowful, puritanical moral lesson after another. Sex between teachers and students is wrong. Pshaaw. Adoption is preferred over abortion. For fucks sake! Brooklynites should have equal access to sexual pleasure as Manhattaners. The hell you say! The writers even took time out from their Diablo Cody “How to Write for Tweens” guidebook to give Blair an opportunity to tell Chuck that her willingness to fuck was based solely on her quest to completely ruin her life. She whispers to him “take me now…to prove that nothing matters.”

How absolutely terrifying! Not for Chuck, whose own wealth and power provide him with ample protection but, for us. Imagine a liberal, New York audience being told that sexual gratification is the purview of the old, the rich and the, most likely, Republican. I can’t imagine one more child would be born on the Upper West Side if such a conceit were true. Very few liberals would get off to the monstrous image of Bill O’Reilly’s sagging balls. The point here is that it is not true. The costuming, the staging, the bevy of un-scarred, un-daddy-issued, un-un-attractive women was too much to believe. Pure rubbish. It would take a troupe of gay men days to pick out so many elegant designer corsets and we all know that gay men provide very little incentive towards a heterosexual orgy.

However unbelievable the play might have been, it certainly fits quite nicely, like a _____into a ______ (insert your own sexual metaphor here – I need not do all the work), into the constantly evolving public preoccupation with sex games. Oprah first broke the non-scandal of Rainbow Parties, meetings of teenagers where up to 7 girls would apply different color lipsticks and attempt to give one lucky, recently pubescent boy the perfect rainbow and an experience he’d go mad trying to recreate the rest of his adult life. Next followed the decidedly more urban Chicken or Chicken-Head parties where, follow me now, girls would get on their knees and walk (well I guess shuffle is the better word) around fellating all comers. Get it? Comers? I’m sorry to be making such lame jokes but the entire thing is a bit lame and a bit of a joke. Again, I point to the production value. Did these parties have make-up artists? Free swag? I’d hate to leave a Rainbow Party without my complimentary “I got my dick sucked by 7 whores and all I’ve got to show for it is this lousy t-shirt and a mild case of hep b” tee.

To present an honest and accurate portrayal of sexuality would be far too liberating. To describe for a mass audience that sex is plentiful and accessible if one only abandons their myths of Dionysian grandeur, would serve only to make all men sexual G-ds. There might not be a color-coded, communal blowjob in your child’s future but there is most certainly a depressed, self-conscious chick in his science class who, with a relatively little amount of work, would suck him off. To provide him with that basic knowledge and access would certainly take his mind off ionization of particles. It is like a drinking game. Shut up and chug, bitch. Anything else is window dressing. To teach a husband that there are countless bored housewives who would discreetly allow him to ravish their asshole only to pay their bastard husband back for his imagined infidelities would loosen him from the moral bonds of familial servitude and the job that at once provides food for his brood and lubricates the Capitalist machine.

Unlike in the past where sexual knowledge was verboten to all but the aristocracy, the Marquis de Sade was locked in a sanitarium not for his writing but for his decision to share his writing with the commoners. Peasants were left to wallow, suck and fuck within their own muck, allowing disease epidemics and threats of divine retribution to keep them in check. In today’s G-dless and medically sound age, newer entities must be designed to scare the inferiors. These boogeymen are the twin powers of too much information and a burning, bright line between the “them” and the “us.” If modern media can paint sexual libertines as, at once, giant, menacing, super-wealthy  bastard aristocracy and unattainable ideals at once, they can assure that there sexual fantasies stayed glued to the happenings of Chuck and Blair.