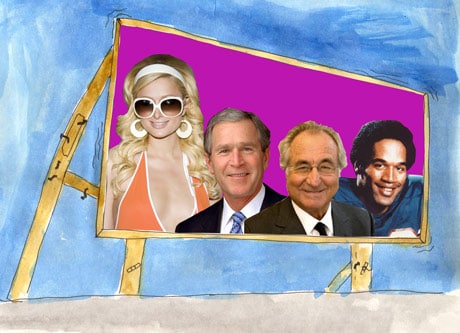 Next time you walk down 5th avenue or anywhere along Broadway, stop for a moment, put your hands by your side and look way up to the sky. What you’ll see wont really be the sky scrapers and the majestic buildings that crowd our landscape but rather the innate American desire to be glorious and super human. The trick of course is to realize while you’re looking into the sky are all the optical illusions and self delusions we use to make ourselves look grander than what we really are…

Living in America has always been about the right to self expression and to find validation in feat and accomplishment. Living in America has always been about the idea of becoming that thing, that idea, that image that you could never or were never allowed to be in other parts of the world. In essence it was about coming to the wild frontier and standing up for what you thought was inherently yours, even if it meant killing, lying, stealing and fabricating…but then again that was then and this is now.

What you’ll notice about living in America today is how important one’s image and ability to reinvent themselves is. Devoid of stereo type images and associations you have people like Ralph Lifshitz coming to the fore, embracing Americana and within a short series of seasons reinventing themselves to become not just Ralph Lauren for instance but an icon for you and me to reckon with and aspire to.

It’s what you do, you come here, have a firm idea of what you’re capable of and then you set your sights and go for it. Whether as a football icon- OJ Simpson, actor like Roy Harold Scherer – aka Rock Hudson, entrepreneur Steve Jobs of Apple or as a president – the Bush fraternity. The goal is to manufacture oneself, to embed a certain persona, hype, to play up to manufactured stereo types and to fulfill the desires of a legion of sporting fans, acting fans, stock holders and even voters (yes even voters want to believe that the guy sitting in office is just like them, values them, understands them and will help inspire them to live the American dream, once of course he has helped the economic elite maintain their prerogative).

Even presidents that we’ve loved came into their fortune through questionable means, (John F Kennedy’s family fortune came from bootlegging) that of course isn’t saying one thing or another, after all empires have always been made off the back of others. Call it colonialism, brutality, exploitation, slavery or just human inclination. Getting to the top is a long hard road, and sometimes one is compelled to make choices that perhaps one wishes they didn’t have to, but for many winning is everything, despite what you are told in the movies.