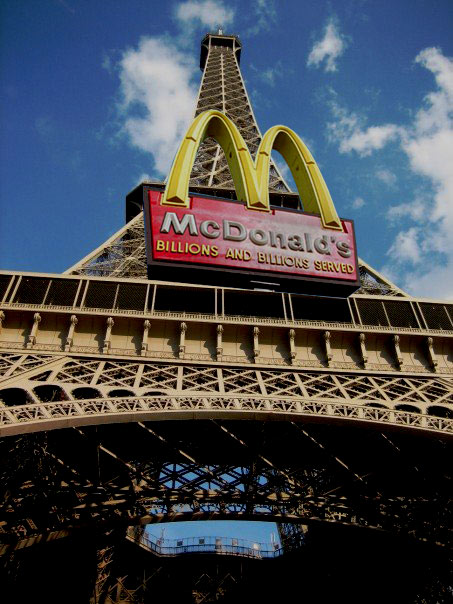 In Paris, people obey the rules. Take, for example, the Luxembourg Gardens, the city’s prettiest and most prominent public park, where people actually resign themselves to looking at the grass instead of playing on it. As a Californian, this confounded me. I looked for people chucking Frisbees. Instead I saw prim types sidling their seats up to the lawn’s edge to ogle the greenery.

I said to Celine, my local companion, “what if I wanted to go out there and run around?”

She replied, “if you do that, the grass won’t be so beautiful.”

I scolded myself for being surprised. What did I expect? Here, visitors gushed, “everything is good” and “the people really know how to live well.” One only had to sit in a bistro or on a street corner bench, pull out provisions, cheese or fruit or bread but definitely wine, and life couldn’t get better. This was Paris, the place where even Metro stops have style.

But as Celine and I eased into the park’s tranquility, I saw a strange, strange sight. All around, instead of wine bottles and baguettes and frommage, I saw picnickers unpacking the most gauche conceivable food for the scene: big, bad bags of McDonald’s.

“McDo’s?” She pursed her lips, “Pfffft” she said and she shook her head. This meant she had no idea, but also it meant that the McDonald’s bags didn’t strike her as out of the ordinary.

They literally surrounded us. Did the French secretly love McDonald’s? How could this be?

The bags were somewhat different here. While in the States, we have brown paper bags with fry stains seeping through, here they had immaculate white bags with handles and no discernable grease on the paper. I watched a pair unpack. The bag had been loaded with care, the burgers on bottom, the fries not spilling as much as I expected. They had little sodas instead of super sizes. They sipped delicately, disinclined to guzzling.

Later that night, I cooked for Celine. Being a proud Californian, I made her shrimp tacos a la WaHu’s in Laguna Beach. I was aghast when she picked up her knife and fork. I didn’t know why she’d set the table with cutlery to begin with, but now I knew as she cut into her tortilla.

I insisted that she could use her hands. She flatly refused.

The McDonald’s people in the park had definitely used their hands. Could it be that McDonald’s, unmistakably American, was the one thing they could eat without the stuffiness of the French dining room table? While Celine may have mistaken fish tacos for something haute, there was no confusion with McDonald’s. Its red and yellow logo was a built-in excuse for her to misbehave.

To investigate, I asked around. Often I heard the same reasons Americans give – cheap, convenient, no time to cook at home. But also, French people repeatedly stated that McDo’s was “fun.”

While in the States, McDonald’s might be a guilty pleasure, rarely will Americans call it a fun one. For many of us, it’s a last resort reserved for road trips or late nights– more like a shameful pleasure. Yes, we enjoy it, somehow, the salt and fat having their way, but being inside a McDonald’s in the States is not fun. It’s industrial, the fry grease hanging in the air, solo diners hunched over their piles of fries, straws squeaking in their plastic lids.

For Americans, getting pizza at three in the morning is something we can definitely call fun, hooligans hollering at each other, loners vying for a date amongst the dregs.

McDo’s, to the French, is more like that.  Their restaurants are nicer. The patrons aren’t beleaguered by the very fact that they’re in there. There are students and couples and people wearing scarves. The food is better. France requires McDonald’s to use French beef so at least there’s no mystery behind the origins of the meat. The packaging is fancier. The cartons have photos of nice looking sandwiches. They offer espresso and pastries at the McCafe and nobody blinks at finishing their meal with a dainty café.

Their standards are definitely higher. The French model could even be a template for what to expect domestically, especially given McDonald’s campaign to lure Americans away from Starbucks with toned up coffee.

Whatever they’re doing there, it’s working. The franchise on the Champs-Elysee grosses more revenue per square meter than any McDonald’s in the world. While the brand is closing branches in other established markets, like the UK and Germany, it’s expanding in France.

This seems counterintuitive. Brits and Germans with their hearty yet homely fare should be more amenable to McDonald’s than the French. But perhaps it’s this very contrast between French food and McDonald’s that enables its success. In France, it’s a true novelty, a true alternative, a truly foreign outing.

Back home, I went to a McDonald’s in Manhattan for a late night meal of Chicken McNuggets (just to research). While standing in line, which was long, I heard a table of French people lingering over apple crisps and sundaes. I approached. I had to know what they were doing there.

I was tentative, even apologetic, when I said that I was curious about the popularity of McDonald’s in France. I assumed that I was being offensive. But no, they reacted completely contrary to my expectations – they were proud of their love for McDonald’s.

“We don’t know why, but we love McDonald’s. We really do,” their front woman insisted. I gave them every window to deny the French fascination with our national cuisine, but instead they supported my claim with vigor, intent on making me understand that they truly loved the food, especially the fries and sundaes. There was no shame here.

It was then that I understood the consistency of McDo’s popularity, the fact that it should surprise no American who’s ever lived in France. In my time in Paris, on multiple occasions, French people wistfully referred to the States as “the land of opportunity.” In all my travels, I’d never heard that expression used so casually. It wasn’t as if some French people like the States and others didn’t. It was more like there was a small piece of every Frenchman who loved the States, even if the rest of him was as proud of being French as French people should be.

My companion, Celine, was a student who, after five years of studying psychology, had narrowly missed the test score she needed to advance to the next step in her certification process. Despite her clear commitment to the profession, she wasn’t going to be able to work in France as a psychologist. She loved France. She loved being French. When I’d marveled at her book collection, she’d replied with characteristic condescension, “This is France. We like to read.” But after she got her insufficient test scores back (a 13.5 instead of the required 14), she also said, “France doesn’t want me to be a psychologist.”

But she knew that, if all else failed, she had America as a backup plan, the place where she could go for a fresh start.

So perhaps it makes sense that when lentils and artisanal cheese and baguettes and regimented propriety are getting our French cousins down, they nourish this small, missing piece of themselves with Big Macs and Fries at McDo’s, a place that lets them uncoil and elicits a sort of fondness that, somehow, seems foreign to us even here at home.