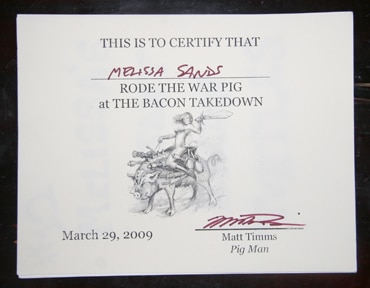 The trouble with insulting hipsters is that they will most often take it as a compliment. Their powers of alchemy do not stop at gentrification. These irony-clasts turn even the most ingenious criticism into a punch line for their own masturbatory self-deprecation. It is hard to satirize a lifestyle based on satire. And, it is hard to hit a moving target. Hipsters adopt and shed trends with amazing dexterity, proving their chameleon candy-coating to be their greatest weapon for survival. There is no “in” or “out” when there is no permanence.

The Hipster Movement…and, make no mistake, it is a movement… lacks all the (what I imagine to be) anthropologically deduced qualifications for sub-culturehood. There is no common language, music, magazine or even contiguous land-mass. Brooklyn and Queens are, and I find proof of G-d in this point, islands. There is no there. Theirs is a culture of appropriation. They are culture communists, social…um…socialists, if you will, who take-on and by so doing, lampoon the blinking, bright-lights of other, lesser, minority (in number, not socio-economic status – calm your bleeding hearts) communities. They are a re-generating ouroboros, the snake that eats itself and, as such, can only be killed by internal poisoning, gorging and some sort of ritualistic murder/suicide pact that will most certainly involve corduroy. 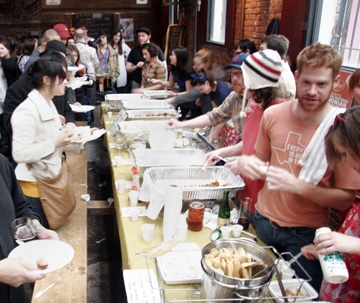 Enter Matt Timms. Timms is the comedic and gourmand top chef (pun so intended) of the comfort food, competitive cooking competitions. His first four events featured chili and serves as an appropriate metaphor going forward. Thanks, Matt! A piping hot bowl of layered, gooey, spicy, gaseous irony, the competitions pitted Williamsburg elites in battle to create the finest, most original takes on a traditional, unsophisticated dish. That these battles were waged in dirty bars, clubs and performance venues while money-clean, sophisticated vegan restaurants stood close by, built for and by the self-same people competing in these meat-offs, made it even spicier. That they had money, yet gorged themselves on the $10 eating orgy, gave the metaphor kick. It is a recession, after all, and trust funds have lost both trust and funds.

What a perfect time, then, for Matt to unveil his next secret ingredient (again, with the pun). The Bacon Takedown occurred this past Saturday. And, it was no small affair. Within moments of the door opening, the event was sold out. Gone was the childish charm of hipsters playing with themselves like so many only children. A shining light of promotion and mass acceptance had been cast. Perhaps sensing this, the crowd was unhappy. The usual, graceful, unaffected affectations of waiting were replaced by urgency.

People needed in! Matt Timms had found a there. And, he had invited not only hipsters, but their parents, a handful of frat boys, some whiny, stretch pant wearing girls from that other great island, Manhattan, and a few people that had showered, shaved and driven an actual car. Not a bike. Across a bridge. To Brooklyn. After church. And, the Good Morning America team!

This had all the makings of a high-production, the views and opinions expressed in the commentary to this DVD box set do not represent the parent company, mass-media event. At any moment, Bobby Flay would have walked in, smirked, smacked a tights wearing girl on the tush and unveiled his master bacon recipe. It was snake.

Could the ouroboros find sustenance in a formerly unknown diet? As usual, the event was a raucous, beer-fueled affair. The recipes were well-considered (for the most part), the crowd hungry and the judges earnest. But, they were all there, known and identifiable. The distinction between those who had been moved by the proto-feminist flyer of a She-Ra looking heroine riding a warpig into battle as posted in the New York Times write-up and those who are Radergast Hall regulars were clear.

The regulars were swilling cheap beer and running around dizzily in white t-shirts with pit stains. The outsiders were trying to find order amid the melee, demanding that the insiders give them the most for their $10 dollars. Capitalism had entered the socialist utopia. Work, monkey hipster, work.