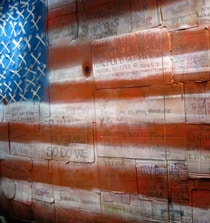 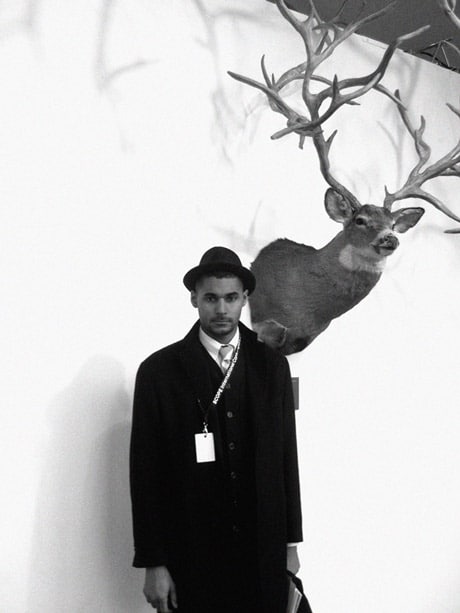 SCOPE, for the most part, has always been the minor league to the Armory Show’s majors.  You go, you have a good time, and there’s usually a few good players, but there’s isn’t a lot of Derek Jeters.  Not yet at least.  Let me put it this way, if The Armory Show were Melrose Place, then Scope would be Models Inc.  No wait, that’s not quite fair, SCOPE is successful and in it’s 8th year.  Models Inc. only lasted one season.  How else can I say it? I’ve got it.  If the Armory were Williamsburg, then SCOPE would be Bushwick.  It’s the freshman class. And I’m not saying that there aren’t great artists at SCOPE, I’m just presenting the obvious contrast.  You get the idea I’m sure.

With 50 international exhibitors from four continents spanning 20 countries, it’s an exhausting march, and there’s no way I could or would talk about all of the artists. The best I can do is present five who caught my eye, and suggest that you go see for yourself so that you may find your own favorites. 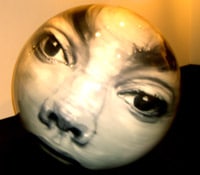 First up we have from the Mike Weiss Gallery in New York representing the Austrian artist Martin C. Herbst.  Select pieces from his Installation View collection, most notably, the large steel spheres half painted with women’s faces.  A nod to Pierro Fornassetti? Perhaps, but you can’t eat off of these. You can however roll them around and see your reflection on one side (I do not recommend trying to roll them while at SCOPE.).  What makes a successful sculpture is it’s ability to be used gracefully as an accessory to murder and rolling one of these babies down a flight of steps towards an old heiress is cinematic gold.

Next, hailing from “Madrit” is superstar artist Juan Francisco Casas represented by Galeria Fernando Pradilla.  You want a Jeter, this guy is a Jeter. Juan reproduces his own captured photos in the form of large oil canvases typically of young and free beauties in fleeting moments of fun. But in this particular Aquafan Series, they’re all done with a Bic pen and the details are just breathtaking.  Every stroke of cheap one-dollar ink is so precise that the astounding effects are awe inspiring and the use of blue only adds to the haunting effect that these are just ghosts of some great night out.

Moving back to the states, it’s that city by the bay, San Francisco’s The Shooting Gallery is representing monumental American Flag.  Against a wall constructed from the signs of homeless people, that he did in fact pay them for is Old Glory herself.  The Stars and Stripes born from the grumbles and gripes by the silent shame of our great declining country. Move in close, have a look at them all.  One particular piece of cardboard stands out, “My wife has been kidnapped.  Need 99¢ to get the bitch BACK!”  Ah, God bless the American homeless.

Thirsty like two exiles stranded in a dessert of paper mache and acrylic, my comrade and I make our way through a dark corridor leading to the Cheap Fast and Out of Control exhibit and bar.  CFOOC is a pavilion connected to the tents of the art fair where art may be purchased directly from the artists putting 70% of the sale in their very own pocket.  While sitting on a small rickety wooden bench near a small counterfeit fireplace, one gets the feeling of being in the cabin of some madman waiting for his next victim.  An old woman enters; elegant and lost in her grey pant suit and trips on a low wooden landing, falling with a loud thud.  At that very same moment, a young crippled man is passing by, walking with a cane, and stands staring, offering his crutch to assist her.  With a glass of red wine in my left hand and white and my right, I’m enthralled by the significance of this piece until I’m told to help her.  Being as my hands where quite full, and watching her refuse the help from anyone, I realize that this is not part of the exhibit but that it very well could have been.  The area is taped off in orange that reacts with the black light to give warning to any other missteps and it’s back to the main room for one last glance.

Which brings us to David O’Kane.  Represented by the Galerie Schuster in Berlin, you will get just small glimpse of this artist in the form of two identical Oscar Wilde portraits that mirror each other.  Above them is a monitor that has the same two paintings but one is brought to life in an eerie animation.  You can see for yourself here.  Upon further exploration of David’s other animations, I am now so impressed that I rank him as my favorite from the show, but like most things in life, it’s all a matter of taste and you’ll have to go see for yourself.  Just try not to over analyze.  Like the great Oscar Wilde said, “All art is at once surface and symbol.  Those who go beneath the surface do so at their peril.” But I must say, it’s rather ironic that Mr. O’Kane has put Mr. Wilde in front of a mirror, forcing him to be the spectator of himself, with no choice but to see beneath his very own surface. But just look at me, tempting fate…