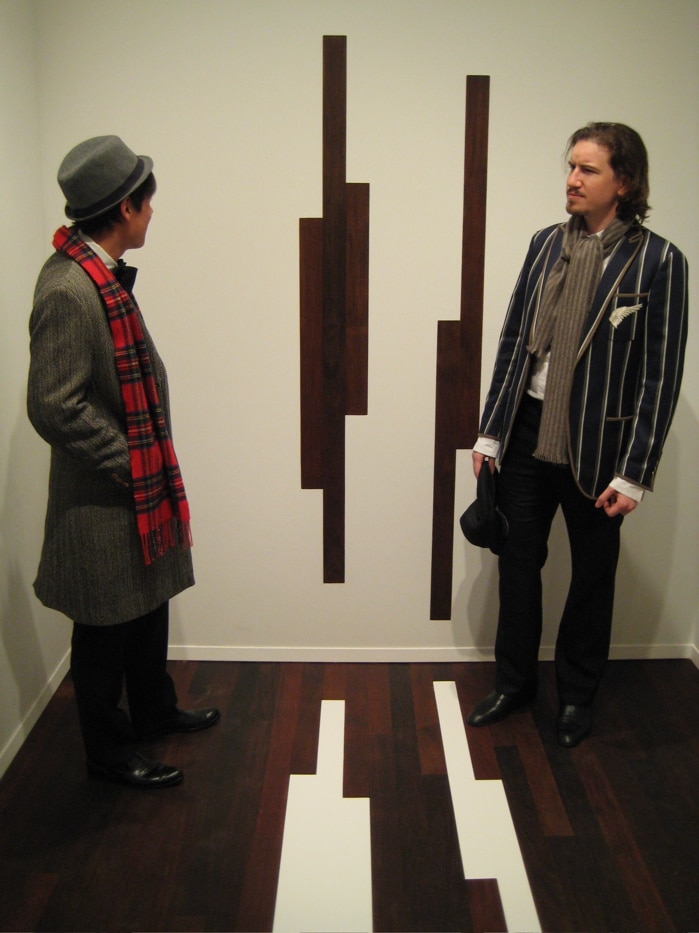 For Davide Balula, all that it takes to make a captivating art piece is… a utility closet? In a city where the intangible emptiness of a space is what comes with the highest price tag, city dwellers are forced to become astute engineers to create nothingness out of something. And although French artist Davide Balula has just dived into the Big Apple four months ago, he has already tasted its ingenious juices. The installation piece entitled “American Wall Nut,” revealed last Thursday February 26th at Fake Estate in Chelsea, reevaluated space as an entity whose meaning can only be determined by those who experience it. 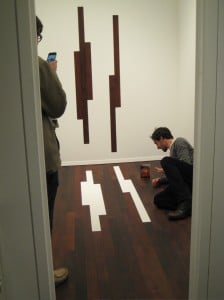 The claustrophobic anxiety of trying to get through the labyrinth of people waiting to view the tiny space provided a nice contrast to the relatively more open utility closet, ironically. The itch of curiosity tugged and pulled, pushed and lured every single visitor into this yet undiscovered territory like a violent stream of water. Acceptable as this chaos may have been outside of the delineated artistic space, it was instantly negated as one walked through the very door frame which separated the art-space from the other-space. The territorial space of art is always instilled by the mere ideal reverence affiliated with the term “art.” It is only in this territory of Fake Estate that the viewer entered a state of minimalist space were he was forced to quietly fold back onto himself in order to make sense of what he was visually confronted with.

A Gordon Matta-Clark inspired installation awaited hidden in the small space. But as Balula prophesized, “hiding something can sometimes connect to the will of revealing it more.” Indeed, the installation was fierce, bold, like four sets of thunderbolts ready to slash your thoughts. A set of three identical mahogany wood floor panels arranged vertically in different heights were incised in the wall next two a set of two, creating a stark contrast to the pristine white plaster wall directly opposite the entrance. This two dimensional configuration was then negated, or perhaps complimented by the mirror reflection of the wall design configured with opposing materials.

The plaster floor boards created a sense of three dimensional emptiness upon which the viewers did not want to trample. Warned by their superegos that they should not cross or dirty these intangible boundaries, most people decided to tiptoe around the perimeter of the room to see the misbehaving wooden floor boards assaulting the white wall. Very nonchalantly in a soft joking voice, Balula explained “you can walk on the walls too, you’ll get them dirty too, but you can walk on the walls!”

This free spirit of the French artist is what made “American Wall Nut” work. “Everybody can see what they want in abstract forms, art has to be experienced.” Conventionally, paintings are hung on the walls and sculptures are elevated on pedestals, but this is no fun. This involves no creativity, just adherence to strict conventional rules of display. With an flat, optical illusion installation like Balula’s, imaginations are shaken and stirred.

For Todd Bacinich, the stark geometry of the wall boards resembled skyscrapers which cast reflections of an imaginary light onto the floor in the form of plaster. Andrew Heid saw black and white piano keys arranged in a syncopated rhythm. Others saw highly abstract orthographic projections. The tightly compressed atmosphere of the utility closet squeezed out multiple threads of imagination amidst an installation which seemed to assimilate materials.

The creativity of each individual brought each branch of the “American Wall Nut” to life. With the help of Julia Trotta, the founder of Fake Estate, and independent curator Beatrice Gross, Balula created a piece that is the perfect manifestation that a simplistic project is always the most complex, or as he puts it Confucius “offering simple is often a trick to hide the mountain.”

The more walls are erected, the more windows are opened. So open up you door and envision your own space at Fake Estate before the installation is taken apart on April 4th, 2009.