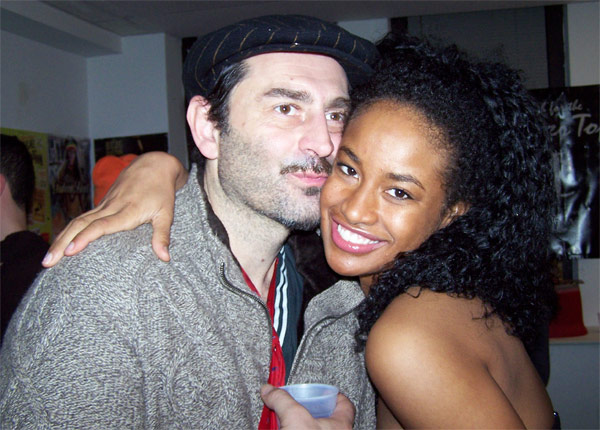 It’s a cold blustering day and we’ve just been tipped about a lead that we have just got to check out. Forty minutes later I am wafting, nay, struggling for dear life with a million cameras flung in my face as I turn to face the eponymous star of the newest up coming reality…

show on the block- “LIFE.”-SW. Standing there, watching the cameras hover over us like a ripe hive and beckoning honey bees I look straight at SW smile and announce;

“You’ve got some real chutzpa.”

“Especially when it comes to the A list crowd, and the celebrated.”

Turning to Christopher Surrey, president of ‘Paint box labs.’ who has recently joined forces to help SW  (the mastermind behind this intriguing project) I ask him his take and what’s compelled him to get involved.

“I’ve been thinking about a way to get people to think about not who’s seen in front of the camera but who also works behind the camera.”

He pauses for a moment while a milieu of camera men in front of us fight for pole position as SW now works a new side of the room.

“I want people to appreciate the diversity of careers, opportunities out there. We don’t all have to become movie stars.”

“Well some of us,” I kindly demure “but I guess the gist is to get people to appreciate there’s life working behind the camera.”

“Yeah, not everybody is gonna be JayZ, but there’s a big industry behind the camera’s that ‘document’ the lifes of people like Jay Z. And that’s what I find intriguing…”

Ever since Federico Fellini came up with his seminal masterpiece documenting the apathetic, ambivalent and detached life of celebrity reporter Marcello of ‘LA DOLCE VITA’ fame the world over has gone gaga over his sagas. So gaga that boys and girls the world over eke out a grand living chasing and living through osmosis the lifestyle of celebrities.

“So when can we expect to see the show?”

“Is that to say it’s already been picked up?”

“Let’s just say BET and MTV are very interested, amongst others and that’s all I’m prepared to say for the time being.”

I work the room, or rather the room works itself, publicity agents, aspiring models, stars, a Dj in the background strutting his beat and the bristling energy of a crowd who knows there’s something in the wood works.

Coming across one young femme fatale, Jolie (she’ll kill me because I can’t remember if that’s her real name or just her stage name).

“I think people are interested in what the media is portraying,”

“But is what they portraying real?”

“I’m not sure, but I think people want it to be real, and for some people it is real,”

“So what kind of reality show do you like to watch?”

Whatever the outcome, it should be an interesting one, SW his own presence and ties to the high stakes world of Moet Champagne and the cognoscenti seems to be rather confident.

“For me, I love it, you pick your parties and you go and see what happens. I’ve been doing this scene for a long time and there are some stories that have just got to be told.”

His publicity team is all over him, whispering I’m not sure what, fashion runway at Gotham hall, a new restaurant opening in Union square and the upcoming Mercedes Benz Fashion week to nab front row seats in.

We’ll be watching as this team set out to explore this “life’ and what in eventuality this all portends about the social collective. Watching to see how Fellini’s “The Sweet Life” reiterates itself in a saturated market, watching to see how SW will ultimately claim his own persona and journey, a journey that promises to make the paparazzi the ultimate star.

As we make to make our exit, it suddenly occurs to me as the cameras click incessantly that somehow I am living the life of a paparazzo myself, whether I want to or not…